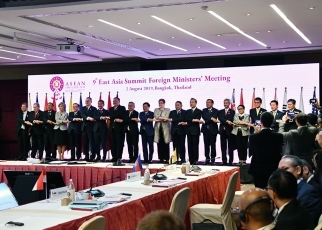 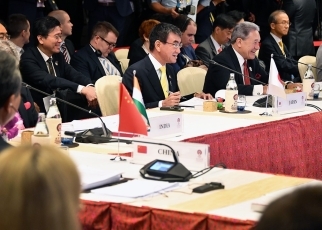 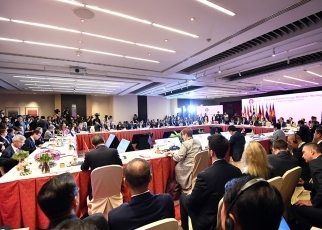 1. Exchange of views on regional and international issues

Minister Kono stated that the recent meeting between the leaders of the United States and North Korea would pave the way for an opening to revitalize the process towards North Korea’s denuclearization and expressed his support for and commended the efforts made by the US. Minister Kono further expressed his regret at North Korea’s recent launches of short-range ballistic missiles. He stressed the importance of standing united to support the US-North Korea process to achieve complete, verifiable, irreversible dismantlement of all weapons of mass destruction and ballistic missiles of all ranges in accordance with the United Nations Security Council resolutions (UNSCRs) including by countering “ship-to-ship transfers.” Minister Kono expressed his expectation for EAS’s continued cooperation towards early resolution of the abductions issue.
Many participants raised the issue of North Korea and stressed the importance of complete denuclearization of North Korea as well as the continued full implementation of the UNSCRs by the international community.

Minister Kono stressed the need to uphold the rule of law in every sea including the East and South China Seas and stated that Japan shares a serious concern with EAS participating countries over the worsening situation in the East and South China Sea. He expressed his strong opposition to attempts to unilaterally change the status quo as well as acts of intimidation against other parties and called for demilitarization of disputed features and peaceful resolution of disputes in accordance with international law as reflected in the United Nations Convention on the Law of the Sea. He also emphasized that the Code of Conduct in the South China Sea (COC) must uphold the principles of freedom of the seas, and must not prejudice the interests of third parties or the rights and freedoms of all states under international law.
Almost all of the participants took up the issue of the South China Sea and referred to the importance of freedom of navigation and overflight as well as peaceful resolution of conflicts in accordance with the international law including UNCLOS. In addition, many participants expressed serious concerns over the recent development on the ground and stressed the importance of non-militarization as well as self-restraint. They further expressed expectation for effective COC and emphasized that the COC should not infringe upon the rights and interests of third parties.

Minister Kono explained that he visited a camp in Cox’s Bazaar before arriving to Bangkok and stated that the condition of the camps is still severe. He emphasized that in order to realize early repatriation, direct and constructive dialogue between Myanmar and Bangladesh is indispensable. He also expressed his intention to continue to support displaced people as well as host communities and encourage Myanmar to create an environment conducive to their return. Minister Kono stated that Japan appreciates the enhanced role of ASEAN in supporting Myanmar’s effort.
Many countries raised the issue of Rakhine State and expressed their support for efforts made by ASEAN. They stressed the necessity of creating an environment conducive to realize repatriation of refugees in a safe, voluntary and dignified manner. They further emphasized that the Government of Myanmar must cooperate with United Nations Organizations.

In addition, there were discussions on counter-terrorism and violent extremism as well as promotion of free trade. In this regard, in response to a remark that an EAS member made regarding Japan’s review of its export control, Minister Kono explained Japan’s position on this matter.

2. Review of EAS Cooperation and its Future Direction

Minister Kono stressed that there is a need to step up efforts to promote candid dialogues at the EAS, which is the premier forum of the region to discuss the top-priority strategic issues, and called for making more use of the EAS Ambassadors’ Meeting in Jakarta (EAMJ).
A number of the participating countries emphasized the importance of further strengthening the EAS as the premier forum of the region.