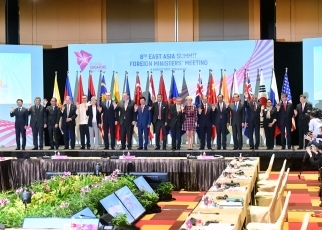 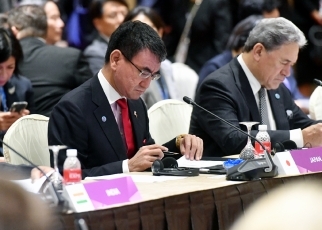 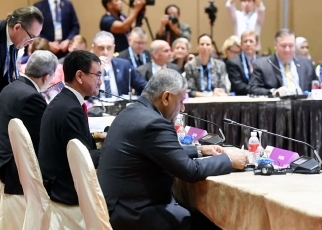 Foreign Minister Mr. Taro Kono attended the 8th East Asia Summit (EAS) Foreign Ministers’ Meeting which was held in Singapore, on August 4 from 11:00 to 13:05 (local time). The overview of the meeting, focusing on Minister Kono’s comments, is as follows.

1. Review of EAS Cooperation and its Future Direction

Minister Kono stressed that EAS has proven itself to be an effective mechanism to tackle issues such as the issue of North Korea, facilitation of maritime cooperation, and promotion of free trade.
A number of the participating countries emphasized the importance to further strengthen the EAS as the premier forum of the region.

2. Exchange of views on regional and international issues

” which Japan promotes share the basic principles and made it clear that Japan will give priority to developing“quality infrastructure”for enhancing connectivity across the region, to promoting free trade including through TPP and RCEP; and to taking measures for peace and stability, such as capacity-building of maritime law enforcement and Maritime Domain Awareness (MDA) as well as combating piracy and terrorism.
A number of the participating countries explained their views and concepts on the Indo-Pacific. Reaffirming the commonality of these views and concepts, they expressed their intention to continue discussing the way to deepen coordination among them.

Minister Kono commended the efforts by the United States and Republic of Korea (ROK) toward“complete denuclearization”of North Korea. The Minister called for close coordination towards the realization of the goal of complete, verifiable and irreversible dismantlement of all weapons of mass destruction, and ballistic missiles of all ranges by North Korea, in accordance with the relevant United Nations Security Council resolutions (UNSCRs). He emphasized the importance of maintaining and strengthening the efforts to close“loopholes,”including“ship-to-ship transfers.”Furthermore, Minister Kono called on other participating countries to cooperate for the immediate resolution of the abductions issue. In response, almost all of the participating countries raised the issue of North Korea. Most of them stressed the importance of realizing complete denuclearization of North Korea and reiterated that the international community needs to continue implementing the relevant UNSCRs. Some countries expressed their understanding for the immediate resolution of the abductions issue.

Minister Kono stated that Japan shares with other countries in the region serious concerns over the situation in the South China Sea. He expressed his opposition to attempts to unilaterally change the status quo and stated that such moves may undermine freedom of navigation. He expressed his expectation that efforts such as the Code of Conduct (COC) negotiations will lead to demilitarization of disputed features as well as a peaceful and open South China Sea.

Almost all of the participating countries took up the South China Sea issue and referred to the importance of securing the freedom of navigation and overflight as well as peaceful resolution of conflicts in accordance with the international law including the United Nations Convention on the Law of the Sea (UNCLOS).There were also many countries which expressed serious concern over the recent development on the ground and stressed the importance of non-militarization as well as self-restraint. Moreover, many countries among them referred to the necessity of an effective Code of Conduct (COC).

There were also discussions on counter-terrorism and violent extremism, promotion of free trade and the situation in Rakhine State.