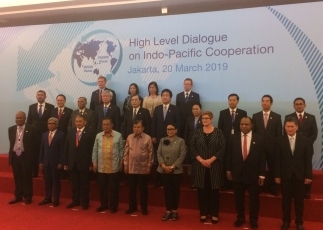 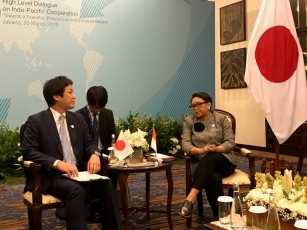 From March 19th to 21st, Special Advisor to Prime Minister, H.E. Mr. Kentaro Sonoura visited Jakarta, Indonesia to participate in the High-Level Dialogue on Indo-Pacific Cooperation hosted by the Government of Republic of Indonesia.

2. At the General Debate, Special Advisor Mr. Sonoura first expressed his condolence over the shooting incident in Christchurch, New Zealand. He then explained Japan`s view towards a free and open Indo-Pacific and emphasized that each countries including Japan can seek synergy among the various concepts and complement each other`s initiatives toward the shared goal. He also called on the participants to make this year a year of action to realize a free and open Indo-Pacific. (text of the statement (English (PDF)

3. In response, the participating countries emphasized the necessity of promoting basic principles such as openness, transparency, inclusiveness, rules-based order, ASEAN centrality in the region, and confirmed the importance of each country to enhance cooperation with others in fields such as connectivity, maritime cooperation and sustainable development while promoting its own concept.