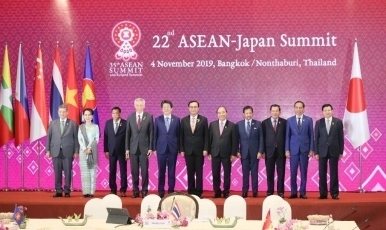 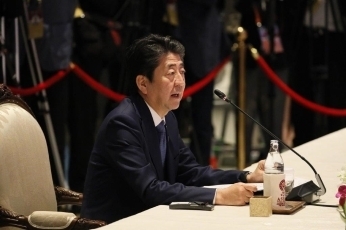 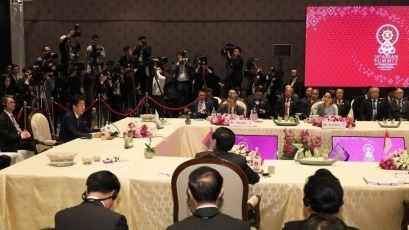 Photo: Cabinet Public Relations Office
On Monday, November 4, from 5:15 p.m. to 6:10 p.m. (local time), the Japan-ASEAN Summit Meeting was held in Thailand chaired by H.E. General Prayut Chan-o-cha, Prime Minister of the Kingdom of Thailand. Mr. ABE Shinzo, Prime Minister, attended from Japan. The overview of the meeting is as follows.

(2) Joint Statement of the 22nd ASEAN-Japan Summit on Connectivity

(3) Initiative on Overseas Loan and Investment for ASEAN

In order to support this Joint Statement financially, Japan will launch the Initiative on Overseas Loan and Investment for ASEAN. We are aiming to mobilize funds, including private sector funds, and are prepared to double the investment and loans of JICA going forward in the fields of quality infrastructure, financial access, support for women and other people, and green investment, with the focus on the ASEAN region.

In May this year, a Technical Cooperation Agreement was signed with ASEAN, and the fact that technical cooperation from which all of ASEAN benefits has become possible also contributes to the strengthening of connectivity. In January next year we will finally implement the first project, Training in Cyber Security, in Japan.

I welcome the fact that the ASEAN-Japan Smart Cities Network High-Level Meeting was held in Yokohama in October this year, and the Japan Association for Smart Cities in ASEAN was established. I will also continue to deepen the Japan-ASEAN Transport Partnership Initiative.

Firstly, in the defense field, cooperation will proceed centered on the fields of humanitarian assistance, disaster relief, and maritime security under the Vientiane Vision. Furthermore, regarding PKOs, in cooperation with the United Nations we have commenced full-scale training on the operation of heavy engineering equipment from this month.

In response, the ASEAN side gave its congratulations on the accession to the Throne by His Majesty the Emperor and the success of the Rugby World Cup, and stated its expectations for the Tokyo Olympics and Paralympics next year. Furthermore, many ASEAN countries mentioned Japan’s support for ASEAN in the area of connectivity, while also stating that they welcomed the Japan-ASEAN Joint Statement on Connectivity adopted in the meeting.
Furthermore, the ASEAN side expressed gratitude and support for the first training on cybersecurity which is based on the Initiative on Overseas Loan and Investment for ASEAN and the Japan-ASEAN Technical Cooperation Agreement, the current new initiatives of Japan. Moreover, the ASEAN side expressed its appreciation for the Japan Foundation Asia Center and its expectations for the activities of the center going forward, and in addition expressed gratitude for Japan’s cooperation for ASEAN, including the Smart Cities High Level Meeting held in Yokohama in October this year, the Fourth Industrial Revolution Dialogue, the ASEAN-Japan Day implemented in Hanoi this year, JENESYS, etc.
In addition, the AOIP adopted in June this year was mentioned, discussions toward realization of a free and open Indo-Pacific were held, and there were exchanges of views regarding the North Korea issue and the South China Sea.
Finally, as the Chair of ASEAN and with the approval of all participating countries, Thailand declared the issuance of the Joint Statement of the 22nd ASEAN-Japan Summit on Connectivity and concluded the meeting.
Page Top