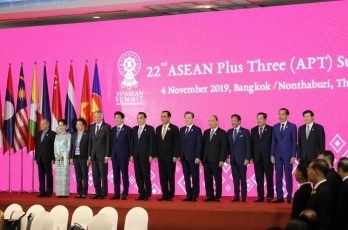 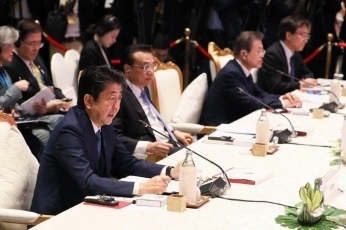 Photo: Cabinet Public Relations Office
On Monday, November 4, from 8:50 a.m. to 10:10 a.m. (local time), the ASEAN Plus Three (APT) Summit was held in the Kingdom of Thailand. Mr. ABE Shinzo, Prime Minister, attended from Japan. The overview of the meeting is as follows.

Following statements from Thailand as the Chair of ASEAN, China, and the Republic of Korea (ROK), Prime Minister Abe made opening remarks followed by the comments below. Thailand conveyed a message of sympathy to those affected by the recent typhoon in Japan.

2 Review and future direction of ASEAN Plus Three cooperation

Aging of the population is an unavoidable issue for the region. By promoting the Asia Health and Wellbeing Initiative, Japan aims to bring about a balanced and comprehensive healthcare system in Asia. It is critical to establish a system of sustainable health financing for promoting universal health coverage, and Japan will continue to provide necessary supports to this end.

This year, Japan once again supplied rice to the Philippines and Myanmar under the ASEAN Plus Three Emergency Rice Reserve Agreement. Japan will also continue its supports for the Southeast Asia Disaster Risk Insurance Facility.

Japan will continue to coordinate with member countries to achieve high quality higher education while increasing student mobility in the region.

Japan will continue to provide supports to Asian countries with regard to terrorism and violent extremism, which is the root cause of terrorism. In this regard, in April of next year, Japan will host the Kyoto Congress for the first time in 50 years. High-level participants are expected to attend.

3 Exchange of views on regional and international affairs

Japan strongly condemns launches of ballistic missiles by North Korea, which are clear violations of United Nations Security Council (UNSC) resolutions. It is important that the international community remain united to support the U.S.-North Korea process toward the denuclearization of the Korean Peninsula. It is critical to maintain full implementation of the UNSC resolutions, including countering “ship-to-ship transfers”. Japan’s basic policy of seeking to normalize its relations with North Korea through comprehensive resolving outstanding issues of concern, such as the abductions, nuclear and missile issues, as well as settlement of the unfortunate past remains unchanged. I am determined to meet Chairman Kim Jong-un face-to-face without attaching any conditions. I would like to once again express my gratitude to all countries that have reached out to North Korea on the abductions issue. I ask for your continued understanding and cooperation toward the early resolution of the abductions issue.

From the ASEAN side, many countries noted on the cooperation and progress made in accordance with the APT Cooperation Work Plan (2018–2022), and expressed appreciation for the efforts of Japan, China, and the ROK for APT cooperation.
In addition, many countries stated the importance of countering the rise of protectionism currently facing the world and the region through APT cooperation, which overcame the financial crisis some 20 years ago. Furthermore, ASEAN welcomed the “ASEAN Plus Three Leaders’ Statement on Connecting the Connectivities Initiative” adopted at the Summit, and expressed expectations for deriving synergistic effects between this Initiative and the connectivity initiatives of member countries to strengthen connectivity in ASEAN and East Asia.
Regarding North Korea issues, a number of participating countries noted on the importance of resolving the issues through dialogue, achieving complete denuclearization of the Korean Peninsula, and implementing UNSC resolutions.