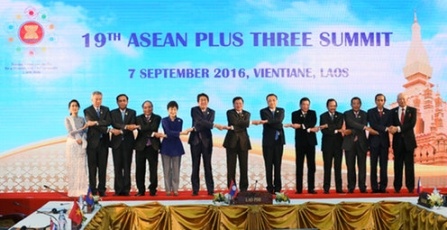 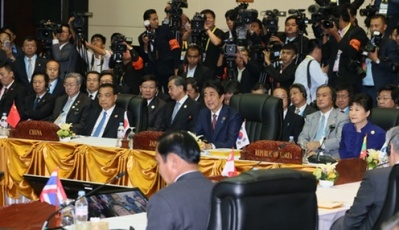 Photo: Cabinet Public Relations Office
The ASEAN Plus Three (Japan-China-Republic of Korea) Summit was held in Vientiane, Laos on September 7. Prime Minister Shinzo Abe attended the meeting. The overview of the meeting is as follows. The meeting was chaired by His Excellency Dr. Thongloun Sisoulith, Prime Minister of Laos.

2 Review of ASEAN Plus Three cooperation and its future direction

(1) Prime Minister Abe stated the following.
We have been deepening cooperation based on the implementation of the ASEAN Plus Three Cooperation Work Plan (2013-2017). We should conduct an appropriate review of the outcome so far and consider future work plans. Japan has deepened cooperation in such areas as higher education and public hygiene in particular.

(2) Leaders from China and ROK also introduced their cooperation project with ASEAN.

(I) Terrorism and transboundary crimes

The international community including the United Nations Security Council (UNSC) should respond in a resolute manner against the clear violations of UNSC resolutions by North Korea. Japan will make its utmost efforts to resolve North Korea's human rights and humanitarian issues including the abductions issue. Japan calls for understanding and cooperation from each country.

It is important to adhere strictly to the Three Principles of the Rule of Law at Sea that Japan has long promoted and for the international community to work together in order to protect the open, free, and peaceful seas.

(2) Many ASEAN leaders expressed their concerns on nuclear and missile development of North Korea and some of them mentioned about cooperation in the field of maritime security and evaluated Japan-China-Republic of Korea cooperation. Also many ASEAN leaders mentioned that we should be ready for twentieth anniversary of ASEAN+3 cooperation next year.