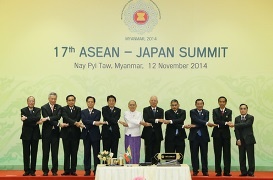 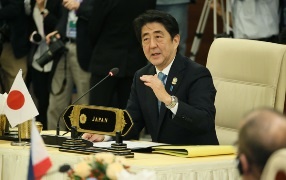 (Photo: Cabinet Public Relations Office)
The 17th Japan-ASEAN Summit Meeting was held for 1 hour on November 12 in Naypyidaw, Myanmar. Prime Minister Shinzo Abe attended the meeting. The overview of the meeting is as follows. The Japan-ASEAN joint declaration for cooperation to combat terrorism and transnational crime(PDF)

was adopted at the Summit Meeting.

1. Review of Japan-ASEAN relationship and the way forward

(1) Partners for Peace and Stability

i) Prime Minister Abe explained initiatives of the "Proactive Contribution to Peace" policy based on the principle of international cooperation, including the Cabinet Decision on the Development of Security Legislation and the review of the Guidelines for U.S.-Japan Defense Cooperation.
ii) Regarding cooperation in the area of maritime security and safety, Prime Minister Abe explained that Japan will continue to cooperate on Japan-ASEAN joint exercises, human resources development and safety of navigation, and announced that Japan will support human resources development for capacity building of maritime security and safety for approximately 700 personnel over the next three years.
iii) Prime Minister Abe welcomed the holding of the Japan-ASEAN Defense Ministers' Round Table Meeting scheduled to take place on November 19, and said he also wants to further deepen cooperation between defense authorities.

i) Prime Minister Abe said the commitment of 2 trillion yen of official development assistance (ODA) over five years that he announced at the Commemorative Summit Meeting last year has already reached approximately 600 billion yen. He said Japan will support the building of the ASEAN Community, through the Japan-ASEAN Integration Fund (JAIF) 2.0 and cooperation projects for enhancing ASEAN Connectivity.
ii) Prime Minister Abe said that in order to respond appropriately to enormous infrastructure demand and achieve "quality growth," it will be essential to promote "people-centered investment." He said Japan is enhancing its support for the development of "quality infrastructure" in ASEAN through such approaches as: 1) preparing support options for effective resource mobilization; 2) long-term cooperation with developing countries through consultation and planning, and strengthening partnerships with multiple development partners; 3) social and environmental considerations as well as life cycle cost; and 4) comprehensive and tailor-made approach.
iii) Prime Minister Abe welcomed that Japan and ASEAN has started the consultation toward the conclusion of a regional air services agreement between Japan and ASEAN. In regard to the ASEAN Japan Comprehensive Economic Partnership (AJCEP) he said that in order to achieve a higher level agreement it will be important for both sides to respond promptly and proactively.

(3) Partners for Quality of Life

i) Prime Minister Abe said Japan is attaching importance to achieving Universal Health Coverage (UHC) in ASEAN, and as part of the "ASEAN-Japan Health Initiative" it intends to support human resource development targeted at 8,000 individuals for the next five-years in order to promote health, prevent illness and enhance the level of medical care.
ii) Prime Minister Abe said that of the "ASEAN-Japan Disaster Management Cooperation" that he announced at the Commemorative Summit Meeting last year, already approximately 60 billion yen of support has been implemented and approximately 250 individuals have been trained, and Japan will continue to provide support through the AHA Center (ASEAN Coordinating Centre for Humanitarian Assistance on Disaster Management) and other entities. He also invited participation in the Third UN World Conference on Disaster Risk Reduction in Sendai in March next year.
iii) Prime Minister Abe mentioned the importance of higher efficiency coal-fired power generation, and said he wants to cooperate on realizing "a society in which women shine."

Prime Minister Abe said that under projects such as the JENESYS 2.0 program, the "WA Project: Toward Interactive Asia through Fusion and Harmony" and "Sport for Tomorrow," heart-to-heart partnerships are steadily growing. Thus far, around 6,200 ASEAN youths have been invited to Japan, approximately 350 Japanese students have been dispatched to ASEAN, and football youth teams were invited and lively exchanges took place in April this year under the JENESYS 2.0 program. Where the "WA Project" is concerned, bidirectional exchanges are steadily developing, including the commencement of dispatches of "NIHON-GO (Japanese language) Partners", and exchanges of ASEAN region films in cooperation with the Tokyo International Film Festival.

(1) Commenting on the South China Sea, Prime Minister Abe said he hopes that the parties concerned will act in accordance with “the Three Principles of the Rule of Law at Sea” that he advocated at the Shangri-La Dialogue, and it is important to reaffirm that it is a regional issue of common concern.
(2) Regarding North Korea, Prime Minister Abe said North Korea’s continued nuclear and missile development poses a serious threat to the peace and stability of the Asia region. He said the abductions issue is a serious problem that concerns sovereignty and the lives and safety of citizens, and as a violation of fundamental human rights it is a problem of the international community overall.
(3) Prime Minister Abe said he wants Japan and ASEAN to cooperate closely on urgent international challenges such as the Ebola virus disease outbreak and ISIL.