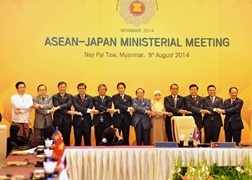 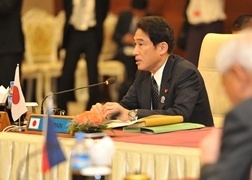 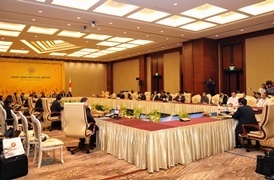 
Opening Remarks
Foreign Minister Kishida opened his statement by expressing his appreciation to both Myanmar and Cambodia for their efforts towards this meeting.  He mentioned his delight to be able to once again co-host with Minister Hor Namhong of Cambodia and discuss with other Ministers continuing from last year.

Minister Kishida emphasized how last year's Japan-ASEAN Commemorative Summit elevated the Japan-ASEAN relationship, and that the Status of Implementation of the Vision Statement is proof that Japan and ASEAN have been working together ever since, not only by words but by deeds.
He also highlighted that he has made significant efforts in promoting Japan's relationship with ASEAN and that he has already built upon 23 meetings with Foreign Ministers of ASEAN during his term, wishing to further enhance the relationship as well as regional and global cooperation.

Review of Japan-ASEAN Relationship and the Way Forward

Foreign Minister Kishida stated that Japan will steadfastly implement the Cooperation Projects for Enhancing ASEAN Connectivity, putting special importance on infrastructure development through human resource development among other capacity building efforts, utilizing the ODA amounting to 2 trillion yen for the next five years which was announced at last year's Commemorative Summit.  He also reiterated that in the course of assistance for infrastructure development in ASEAN, Japan will continue to promote people-centered investment in order to lead private investment to sustainable development through public-private partnerships.
The Minister added that cooperation with OECD and ERIA (Economic Research Institute for ASEAN and East Asia) is significant in strengthening connectivity and infrastructure development.  He noted that the OECD Southeast Asia Regional Programme was launched through Japan's initiative as Chair of the OECD Ministerial Council Meeting held this May, and expressed Japan' continued to play a bridging  role between OECD and ASEAN.
He also highly appreciated the strong contribution the Asian Development Bank (ADB) has made in infrastructure development of ASEAN and affirmed that Japan will continue to assist ASEAN with the cooperation from the ADB.
The Foreign Minister indicated that Japan and ASEAN will make every possible effort towards a high-level agreement on the AJCEP and for the signing of the Services and Investment Chapters.  At the same time, he articulated that he would like to closely cooperate with ASEAN towards the conclusion of negotiations of RCEP by the end of 2015.
His remarks on the Japan-ASEAN Center reflected on how the Center will be of great use to further promote trade & investment, tourism and exchange of persons between Japan and ASEAN.

(2) Partners for Quality of Life

Foreign Minister Kishida emphasized that Japan will strengthen "ASEAN-Japan Disaster Management Cooperation," through assistance towards capacity building and high-quality infrastructure development on disaster management.  He also underlined Japan's priority in assisting the ASEAN Coordinating Center for Humanitarian Assistance on Disaster Management (AHA Center) through its cooperation towards the AHA Center Executive (ACE) programme among others.
He also underscored that promotion of higher efficiency coal-fired power generation is a pragmatic measure in addressing climate change, and that Japan would like to contribute to the stable supply and higher efficiency of energy of ASEAN Member States.
Additionally, the Minister highlighted that as we draft the post-2015 development agenda should reflect the expertise and lessons learned on development that Japan and ASEAN experienced hand-in-hand, and be an effective agenda based on the notion of human security.

Foreign Minister Kishida expressed his delight on the ongoing JENESYS 2.0 program of exchanges among ten-thousand youths.  He especially touched upon the football exchange program that invited approximately 220 under-14 youths from ASEAN to Japan that took part in friendly matches and football camps.
The Minister explained that, under the "WA Project Toward Interactive Asia through Fusion and Harmony", the following two programs have just started: the Japanese language learning assistance program including the dispatch of over 3,000 "NIHONGO Partners" and Two-Way Arts and Cultural Exchange Program.  He also underscored Japan's initiative of "Sport for Tomorrow," implementing sports exchange projects and assistance on sports facility development looking ahead to the 2020 Olympic and Paralympic Games in Tokyo. ASEAN side highly appreciated the initiative.
The Minister also highlighted that visitors from ASEAN to Japan broke the one million mark in 2013 thanks in part to Japan's relaxations of visa requirements of some ASEAN Member States and expressed his delight that there are more ASEAN visitors to his hometown of Hiroshima.

(4) Partners for Peace and Stability

Foreign Minister Kishida explained Japan's policy of "Proactive Contribution to Peace" based on Japan's long-standing principle of international cooperation, including the Cabinet Decision made on July 1st on Development of Seamless Security Legislation.  He reiterated that the course Japan has taken as a peace-loving nation will remain unchanged.
The Minister also emphasized the importance of maritime cooperation, and stated that Japan will expand its contribution for enhancing maritime law enforcement capacity of ASEAN countries, including through the provision of patrol vessels and equipment, human resource development of maritime law enforcement  agencies, and cooperation in the field of international maritime law. He also noted that Japan will pursue the possibility of defense equipment cooperation with ASEAN, and on that note, Japan is planning to host the Seminar on Capacity Building in Maritime Security and Disaster Relief.
Minister Kishida also welcomed the advancement of the Mindanao Peace Process, and expressed that Japan will continue to assist in maintaining peace and developing the community of this region.  Additionally, he stated his intention to support the regional seminar on the establishment of the ASEAN Regional Mine Action Centre (ARMAC) in Cambodia.
Furthermore, he welcomed the launch of the ASEAN Plus Japan Ministerial Meeting on Transnational Crime Consultation (September 2013) and the Inaugural ASEAN-Japan Cybercrime Dialogue (May 2014), and expressed that Japan will continue its efforts for the adoption of a new declaration on cooperation to fight against terrorism and transnational crime at the Japan-ASEAN Summit to be held this year.

Foreign Minister Kishida emphasized that issues concerning the South China Sea are directly related to the peace and stability of the region and therefore, a matter of concern for the international community as a whole including Japan.  He introduced "the three principles on the rule of law at sea", which Prime Minister Abe proposed in his Keynote Address of the Shangri-La Dialogue in May, namely that (1) states shall make and clarify their claims based on international law, (2) states shall not use force or coercion in trying to drive their claims, (3) states shall seek to settle disputes by peaceful means and stated that Japan will extend support to actions that are consistent with these three principles.
He also reminded of Prime Minister Abe's proposal to make a firm pledge and return to the spirit and the provisions of the 2002 Declaration on the Conduct of Parties in the South China Sea that all concerned countries agreed to.

Foreign Minister Kishida addressed that North Korea's nuclear and missile activities as well as its proliferation activities remain actual threats and that we must especially not allow proliferation activities through the Southeast region.  He also that he looks forward to an even more transparent implementation of the UN Security Council resolutions by ASEAN Member States.  Furthermore, the Minister stated that nuclear tests and launches of ballistic missiles by North Korea will seriously impact the process to resolve issues through dialogue.  At the same time, he emphasized that Japan puts importance on the abductions issue, and that Japan will carefully assess the result of the comprehensive and full-scale investigations on all Japanese nationals, including abductees, that are being conducted by North Korea.

Foreign Minister Kishida called for continued close cooperation with each of the ASEAN countries, in order to achieve concrete progress on Security Council reform in view of the 70th anniversary of the founding of the United Nations in 2015.

CLOSING
Foreign Minister Kishida concluded his remarks by expressing his intention to fully prepare for the Japan-ASEAN Summit in November based on today's discussions. He gave his appreciation to the ASEAN Chair of Myanmar for its leadership and hospitality adding that Japan will assist in improving the communication network surrounding the Summit venue and hoped it will help Myanmar's chairmanship.