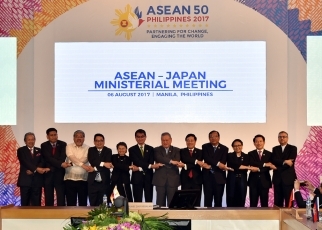 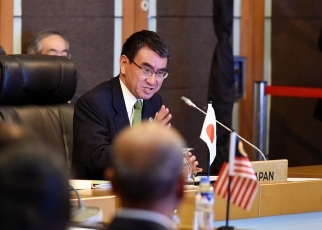 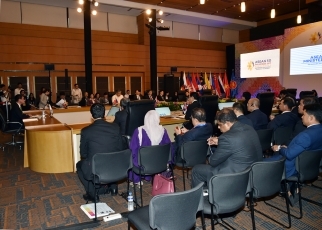 Foreign Minister Mr. Taro Kono co-chaired the Japan-ASEAN Ministerial Meeting which was held in Manila, the Philippines on August 6, commencing at 5:55 p.m. -6:55 p.m. (local time). The overview of the meeting, focusing on the statement by Minister Kono, is as follows.

The Honorable Pehin Dato Lim Jock Seng, Minister at Prime Minister’s Office extended his congratulations to Minister Kono on his appointment as Foreign Minister and expressed his gratefulness to welcome Minister Kono on the occasion of 50th anniversary of the establishment of ASEAN. Furthermore, Minister Lim Jock Seng stated that he appreciates the role played by former Japanese foreign ministers Mr. Shintaro Abe and Mr. Yohei Kono in the context of Japan’s cooperation with ASEAN over the past decades, and conveyed his gratitude for the cooperation extended by Japan to ASEAN to date.

Following this, Minister Kono explained that this is his debut on an international conference as Foreign Minister. Minister Kono also stated that he has previously lived in ASEAN for two years, that he has visited all the ASEAN member states except Laos, and that he intends to visit Laos in the near future. Furthermore, Minister Kono extended his heartfelt congratulations as year 2017 marks the 50th anniversary of the establishment of ASEAN and stated that Japan has consistently supported the political and economic development of ASEAN since the first Japan-ASEAN Summit Meeting in 1977. He added that over the past four years, Japan has implemented Official Development Assistance (ODA) amounting to more than 2.3 trillion yen (more than 20 billion US dollars), based on the guideline for Japan-ASEAN cooperation called “Vision Statement on ASEAN-Japan Friendship and Cooperation” formulated in 2013. He also emphasized that Japan has been steadily contributing to ASEAN’s sustainable growth through the development of quality infrastructure that meets international standards, and human resources development in a wide range of areas, spanning from education to industry.

In addition, Minister Kono emphasized that Japan strongly supports the centrality and integrity of ASEAN, and will continue to assist further integration of the ASEAN Communities, while closely coordinating with ASEAN on principles and needs. From this perspective, he stated that it is his great pleasure to announce the Revised Implementation Plan of the Vision Statement, based on new visions and plans by ASEAN.(PDF)

In addition, Minister Kono announced the official decision on launching negotiations on the Japan-ASEAN Technical Cooperation Agreement and stated that this Agreement will contribute to expand the Japan-ASEAN relationship by enabling the Japan International Cooperation Agency (JICA) to provide assistance for plans and projects that the ASEAN Communities seek to advance in addition to Japan’s existing bilateral assistance to respective ASEAN member state.

2 Review of Japan-ASEAN cooperation and its future direction

Minister Kono stated that Japan has carried out its pledges for cooperation to ASEAN  in a sincere and steady manner, and will continue to provide high-quality cooperation on both hardware and software in areas where ASEAN attaches importance. He also emphasized that one of the important parts of Japan’s assistance to ASEAN is its contribution to realize ASEAN’s visions as Community, such as the ASEAN Economic Community Blueprint 2025.  He reiterated that on the occasion of the ASEAN’s 50th anniversary, Japan is willing to enable JICA to provide direct support for plans and projects by the ASEAN Community through Japan’s technical cooperation to ASEAN, in addition to Japan’s existing bilateral assistance to respective ASEAN member state.  He further explained that by doing so Japan will be able to support ASEAN integration in a more powerful manner, from formulating visions of the ASEAN Community to materializing projects in each country.

Furthermore, Minister Kono mentioned that while the wave of protectionism is spreading around the world, it is incumbent upon all of us to send a message from Asia to promote a free and open economic order and free trade regimes.  While referring that Japan and the EU has recently concluded in principle the Economic Partnership Agreement to enhance this momentum, he stated that Japan and ASEAN should seek for the early conclusion of negotiations of the Regional Comprehensive Economic Partnership (RCEP) led by ASEAN, to reach a comprehensive, well-balanced and high quality agreement.

Most of the participating Ministers from the ASEAN countries extended their congratulations to Minister Kono on his appointment as Foreign Minister. In addition, they expressed their gratitude for the many forms of assistance extended by Japan, including efforts to strengthen ASEAN connectivity, the Expanded Partnership for Quality Infrastructure, the Japan-Mekong Connectivity Initiative, and the Industrial Human Resource Development Cooperation Initiative.

Minister Kono stated that Japan is gravely concerned with the continued building of large-scale outposts in the South China Sea and underlined the necessity of demilitarization. He further emphasized Japan’s strong opposition to any unilateral attempts to change the status quo by force or coercion, including those by the threat or use of force. In addition, he expected that dialogue will proceed in accordance with international law and on the premise that non-militarization and self-restraint will be maintained, and that a legally binding and effective Code of Conduct (COC) will be finalized at an early stage.

Minister Kono reminded that on July 28th, North Korea went ahead with the launch of its second ICBM-class ballistic missile, and stated that ASEAN countries fall completely within the reach of such missiles, and hence the threat has become real for this region. He added that now is not the time for dialogue and that effective pressure on North Korea must be enhanced in order to urge North Korea to take concrete actions toward denuclearization. Minister Kono also stressed that Japan strengthened its autonomous measures against North Korea at the end of July.

Lastly, the Ministers adopted the revised Implementation Plan of the Vision Statement on ASEAN-Japan Friendship and Cooperation and confirmed the official launch of negotiations on the Japan-ASEAN Technical Cooperation Agreement.