The 17th ASEAN Plus Three (Japan-China-Republic of Korea) Summit 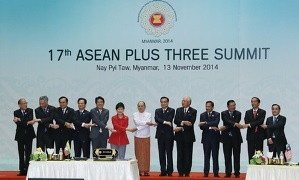 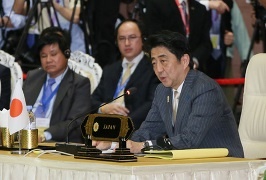 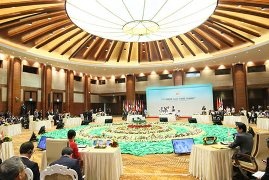 (Photo: Cabinet Public Relations Office)
The 17th ASEAN Plus Three Summit was held in Nay Pyi Taw, Myanmar on Thursday, November 13. Prime Minister Shinzo Abe attended the meeting. The overview of the meeting is as follows. The meeting was chaired by H.E. Mr. Thein Sein, President of the Republic of the Union of Myanmar.

1. Review and Future Direction of of ASEAN Plus Three cooperation

Prime Minister Abe expressed expectation of the ASEAN Plus Three Emergency Rice Reserve (APTERR) system and of further advancement in this field. He referred to Japan’s assistance of rice for Laos and the Philippines and his intention to strengthen the public-private cooperation for “food value chain (FVC).” He also asked for relaxing and lifting of restrictions on imports from Japan.

(3) People-to-people Connectivity (including Education and Tourism)

Prime Minister Abe explained Japan’s initiatives, including the promotion of student exchanges, invitations to Japan that are extended to young people for promoting development of human resources in the field of science and technology. He also explained our position of enhancing coordination with think tanks.

Prime Minister Abe mentioned that Japan would like to work closely to conclude the RCEP negotiations by the end of 2015 and to achieve a comprehensive and high-level agreement.

Prime Minister Abe mentioned that he wants to share the recognition that highly efficient coal-fired power generation is a pragmatic and essential measure against climate change.

Prime Minister Abe mentioned that Japan will particularly contribute in the field of higher education, including promoting student exchanges and improving public health services over the next year.

Prime Minister Abe explained that Japan will contribute even more proactively to ensuring the peace, stability and prosperity of the region and international community from the standpoint of the “Proactive Contribution to Peace” based on the principle of international cooperation, and that Japan’s foundation as a peace-loving nation will not change.

Prime Minister Abe emphasized that North Korea’s continued nuclear-related activities and missile development are serious threats to the international community. He also reiterated his request for understanding and cooperation regarding the abductions issue in order to encourage North Korea to respond positively.