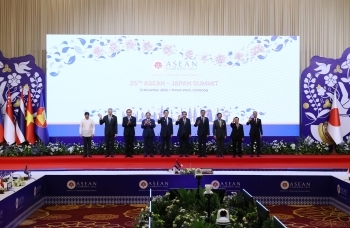 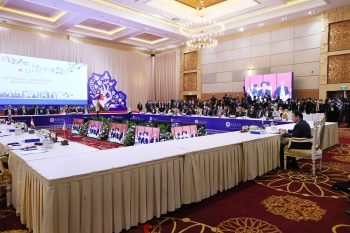 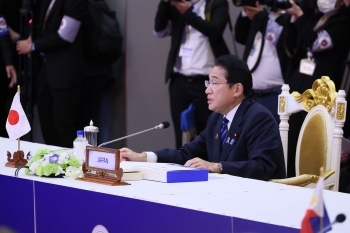 On November 12, commencing at 2:25 p.m. (local time; 4:00 p.m. on November 12 JST) for about 1 hour, the 25th ASEAN-Japan Summit (Chair: Samdech Akka Moha Sena Padei Techo HUN SEN, Prime Minister of the Kingdom of Cambodia) was held in Phnom Penh, Cambodia. Mr. KISHIDA Fumio, Prime Minister of Japan, attended the meeting. An overview of the meeting is as follows. Before and after the meeting, the ASEAN Leaders approached Prime Minister Kishida and engaged in friendly conversations, including expressing their appreciation for Japan’s contribution to ASEAN.

1. Commemorative Summit for 50th Year of ASEAN-Japan Friendship and Cooperation

Following the opening remarks of Prime Minister HUN SEN, Prime Minister Kishida delivered his opening remarks. He stated that he would like to hold a Commemorative Summit in Tokyo around December 2023 as the next year would mark the 50th Year of ASEAN-Japan Friendship and Cooperation. He also said that he would like to listen to the views and interests of each country in preparation for the 50th Year.
In response, many countries expressed their support in their remarks. As the Chair, Prime Minister Hun Sen expressed appreciation to the ASEAN Leaders for accepting Japan’s proposal and confirmed that the Commemorative Summit would be held following a regular annual ASEAN-Japan Summit in 2023.

Prime Minister Kishida stated as follows stressing that Japan and ASEAN shared the view on many points regarding regional and international issues.

In concluding his remarks. Prime Minister Kishida said that he would like to make the Golden Jubilee of ASEAN-Japan relations a golden opportunity to demonstrate golden friendship between ASEAN and Japan as suggested by its official catchphrase.