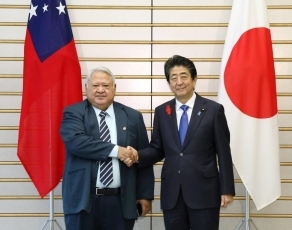 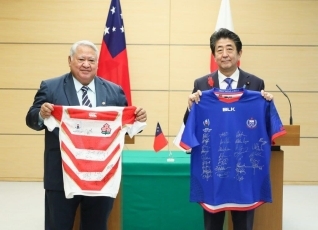 On October 2, commencing at 10 a.m. for approximately 30 minutes, Mr. Shinzo Abe, Prime Minister of Japan, held a summit meeting with Hon. Tuilaepa Fatialofa Lupesoliai Sailele Malielegaoi, Prime Minister of the Independent State of Samoa, who was visiting Japan. The overview of the meeting is as follows.

2. Regarding bilateral relations, Prime Minister Abe said that the Government of Japan has decided to invest more resources toward Pacific Island countries, and would advance initiatives focused on the areas of maritime issues, climate change and disaster risk reduction, and connectivity enhancement. Prime Minister Abe said that it was a pleasure to be able to hold a signing ceremony of the 2.5 billion yen grant aid for the construction of an international cargo/passenger vessel . In response, Prime Minister Tuilaepa expressed his gratitude for the warm hospitality and Japan’s assistance.

4. The two leaders also discussed regional issues such as North Korea including the launch of ballistic missiles this morning and cooperation in regional frameworks, and confirmed that they would continue to work closely together. Prime Minister Abe asked for understanding and cooperation for the early resolution of the abduction issue, and Prime Minister Tuilaepa expressed his support.

5. The meeting was followed by a signing ceremony of a grant aid for the construction of an international cargo/passenger vessel. The two leaders shared the view that they will continue to work hand in hand to strongly develop their bilateral relations and to contribute to the stability and prosperity of the Pacific Island region.

Page Top
Back to Japan-Samoa Relations