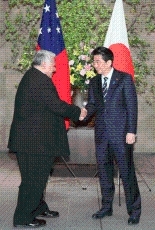 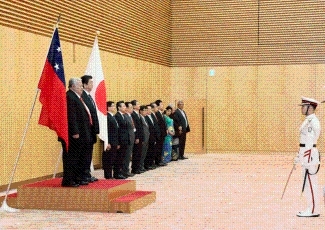 (Photograph of the ceremony by the guard of honor
Photo: Cabinet Public Relations Office) Photograph of the ceremony by the guard of honor
(Photo: Cabinet Public Relations Office)

On May 15, commencing at 6:15 p.m. for approximately 50 minutes, Mr. Shinzo Abe, Prime Minister of Japan, held a summit meeting with H.E. Mr. Tuilaepa Fatialofa Lupesoliai Sailele Malielegaoi, Prime Minister and Minister of Foreign Affairs and Trade of the Independent State of Samoa, who is paying an Official Visit to Japan, which was followed by a dinner with Prime Minister Tuilaepa. The overview is as follows.

2. Prime Minister Abe announced the intention of the Government of Japan to provide a grant aid of approximately 200 million yen for the provision of medical equipment, adding that the Government would continue to support the self-sustaining and sustainable development of Samoa. Prime Minister Tuilaepa thanked Prime Minister Abe for the Japanese assistance provided to the critical sectors of Samoa over many years. In addition, the leaders agreed to strengthen sports and people-to-people exchanges.

3. Prime Minister Abe hoped to work with Prime Minister Tuilaepa for the implementation of Japan’s Free and Open Indo-Pacific Strategy. Prime Minister Tuilaepa expressed recognition regarding the importance of the partnerships under this strategy. Furthermore, the leaders shared the view that they would work together to address the regional situation, including North Korea, and enhance their cooperation in the international arena.

The dinner that followed took place in a very relaxed atmosphere, during which the leaders exchanged views on a broad range of topics.

Page Top
Back to Japan-Samoa Relations