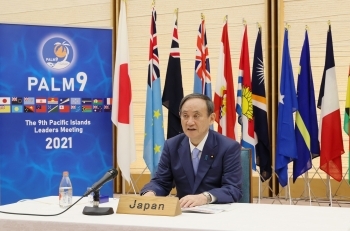 were adopted as an outcome of the discussions.


2 Overview of Each Session

looking back on the history of Pacific Islands Leaders Meeting (PALM).

(4) Session 3 (Cooperation in the International Arena)

Tuvalu, as the co-chair, expressed gratitude to Japan and other countries who led the way to the success of PALM9 and stated that they would like to strengthen the partnership between Japan and Pacific Island countries.

Prime Minister Suga expressed his gratitude to the co-chair Tuvalu and other countries and regions for their efforts towards the success of PALM9.