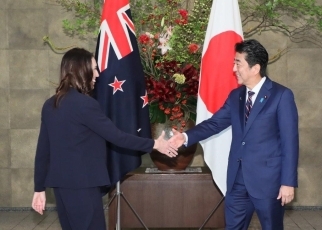 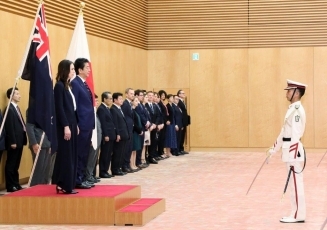 (Photo: Cabinet Public Relations Office)
On September 19, commencing at 10:30 a.m. for approximately 45 minutes, Mr. Shinzo Abe, Prime Minister of Japan, held a Summit meeting with Rt.Hon. Jacinda Ardern, Prime Minister of New Zealand, who is paying an official working visit to Japan. The overview of the meeting is as follows. The two leaders issued a Joint Statement (English (PDF)

. Prime Minister Abe also said that Japan and New Zealand are strategic cooperative partners founded on common values and would like to elevate the bilateral relationship to greater heights and cooperate with New Zealand toward a free and open Indo-Pacific taking advantage of this visit.

3. The two leaders shared the view that the two countries will commence a joint study toward negotiations for an agreement on security information sharing. Furthermore, the two leaders discussed cooperation in the economic field including hydrogen and agriculture, cooperation in areas such as cyber space and expansion of sport exchanges and people-to-people exchanges.

4. As for the Pacific Island region, Prime Minister Abe said that Japan intends to materialize the partnership between the two countries in achieving a “Free and Open Indo-Pacific,” in coordination with New Zealand’s ‘Pacific Reset’ policy on the Pacific. The two leaders shared the view that they will strengthen bilateral cooperation in this regard.

5. With regard to North Korean issues, the two leaders confirmed their cooperation toward realizing the complete, verifiable, and irreversible dismantlement of all weapons of mass destruction and ballistic missiles of all ranges and shared the view on the importance of full implementation of United Nations Security Council resolutions. In addition, Prime Minister Abe said that he hopes for New Zealand’s continued understanding and cooperation toward an early resolution of the abductions issue and Prime Minister Ardern expressed her support.

6. The two leaders also exchanged views regarding other regional situations including the East and South China Seas.

7. The two leaders also discussed international economic order and shared the view that the two countries will lead the international community and cooperate toward steady implementation and expansion of the TPP 11, conclusion of high-quality RCEP within this year, WTO reform and other issues.