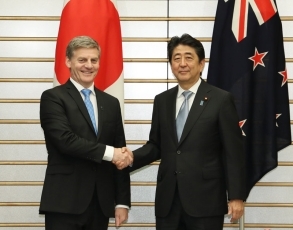 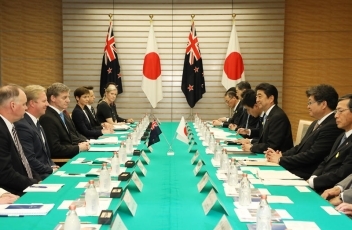 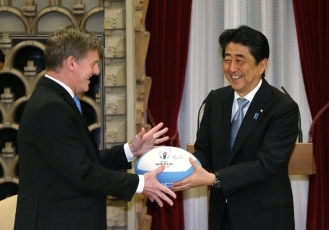 On May 17, commencing at shortly after 6:10 p.m. for approximately 45 minutes, Mr. Shinzo Abe, Prime Minister of Japan, held a summit meeting with the Rt. Hon. Bill English, Prime Minister of New Zealand, who is making an official working visit to Japan. The overview is as follows. In addition, the two leaders agreed to issue a joint press release (English (PDF)

(1) Prime Minister Abe welcomed Prime Minister English on his first visit to Japan since being appointed, and the progress on a wide range of bilateral relationships, including people-to-people exchanges and exchanges between local municipalities. Prime Minister Abe stated that he intends to collaborate closely with New Zealand, which is an important partner that shares universal values with Japan, in order to promote regional peace and stability based on the rule of law as well as free trade and investment based on rules, and seize this opportunity of the visit to boldly advance the partnership.

(2) In addition, the two leaders welcomed the signing of a memorandum of cooperation on sports, and shared the view that they will cooperate toward the success of the 2019 Rugby World Cup and the 2020 Tokyo Olympic and Paralympic Games, which Japan will host.

(3) The two leaders confirmed cooperation in the field of disaster reduction, in light of the fact that both countries are affected by earthquakes.

(1) Prime Minister Abe welcomed New Zealand’s ratification of the TPP, following Japan, and the two leaders confirmed they will collaborate closely together for the early realization of the TPP, including at the ministerial meeting in Hanoi.

(2) With regard to the negotiations on the Regional Comprehensive Economic Partnership (RCEP), the two leaders shared the view that they will collaborate to pursue the early conclusion of a comprehensive, balanced, and high-quality agreement.

(1) Prime Minister Abe explained the “Free and Open Indo-Pacific Strategy” to Prime Minister English, and the two sides shared the view that they will cooperate in order to maintain and strengthen the free and open international order based on the rule of law.

(2) The two leaders held an in-depth discussion on the issue of North Korea such as nuclear, missile, and the abductions issue, and shared the view that Japan and New Zealand will strongly urge North Korea to fully comply with its international obligations, including the relevant United Nations Security Council (UNSC) resolutions, and will collaborate toward the resolving of the abductions issue at the earliest time.

(3) The two leaders shared recognition on regional affairs such as the South China Sea and the East China Sea, and confirmed that Japan and New Zealand will collaborate.