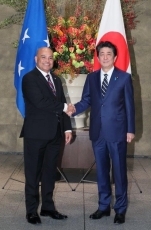 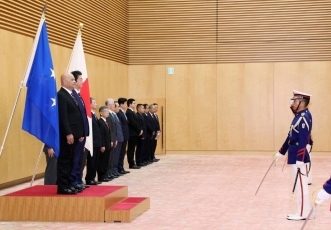 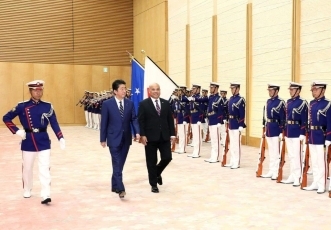 On November 14, commencing at 10:50 a.m. for approximately 50 minutes, Mr. Shinzo Abe, Prime Minister of Japan, held a summit meeting with H.E. David W Panuelo, President of the Federated States of Micronesia, who is visiting Japan. The overview of the summit meeting is as follows.

1. At the outset, Prime Minister Abe stated “I welcome your visit to Japan following the Ceremony of the Enthronement. The Federated States of Micronesia is a special friend of Japan, bound by historical connections. I intend to work closely with President Panuelo to develop our bilateral relations.” In response, President Panuelo stated, “I am grateful for the warm welcome on my visit to Japan. I am pleased to be able to meet Prime Minister Abe following the Ceremony of Enthronement.”

2. Regarding the bilateral relations, Prime Minister Abe stated “Japan has decided to invest more resources into Pacific island countries. Our priority areas are enhancement of connectivity and maritime issues, on which President Panuelo places importance,” and “Japan will coordinate with like-minded partners such as the United States, Australia. To strengthen support for the sustainable economic and social development of the Federated States of Micronesia, keeping in mind that financial assistance from the United States based on the Compact of Free Association will expire in 2023.” In response, President Panuelo shared his appreciation for the support of Japan to various fields over many years.

3. In addition, Prime Minister Abe conveyed that “I will continue to implement grass-roots exchanges and exchanges through the activities of the Japan Self-Defense Forces, between Japan and the Federated States of Micronesia,” “I intend to continue to cooperate closely in fields which are extremely important to Japan, including fisheries and the recovery of the remains of the war dead ,” and “I intend to cooperate toward the PALM Ministerial Interim Meeting which is to be held in Fiji in the middle of next year.” President Panuelo expressed his full support.

4. The two leaders held discussions about regional situation including the North Korea, such as the launch of ballistic missiles by North Korea, and confirmed that they would continue to work closely together with like-minded partners including the United States. Prime Minister Abe requested understanding and cooperation towards the early resolution of the abductions issue and obtained full support of President Panuelo.

5. President Panuelo announced his support for Japan’s permanent seat in the Security Council and its candidature for the UN Security Council non-permanent member election in 2022, for all of which Prime Minister Abe expressed gratitude.

Page Top
Back to Japan-Micronesia Relations