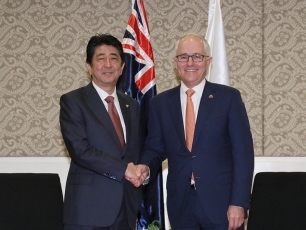 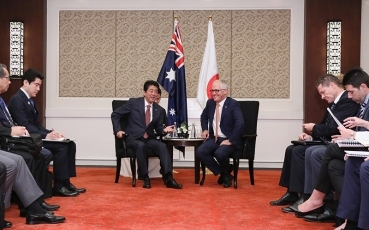 On November 13, commencing at around 11:50 a.m. (local time) for approximately 30 minutes, Mr. Shinzo Abe, Prime Minister of Japan, held a summit meeting with the Hon. Malcom Turnbull, Prime Minister of Australia, in Manila, the Philippines, during his visit to attend the ASEAN-related Summit Meetings. The overview of the meeting is as follows.

1. In opening remarks, Prime Minister Turnbull stated that the discussions with President Trump earlier were very constructive, that Japan and Australia share strategic interests, and that he hopes to hold discussions today on advancing the strategic partnership between Japan and Australia. In response, Prime Minister Abe said that it is exactly the time to strengthen the relationship between Japan and Australia, which share fundamental values and strategic interests, and expressed his intention to coordinate closely with Australia to maintain and strengthen the free and open order in the Indo-Pacific region, and to make it a global commons that benefits the whole world.

2. The two leaders agreed to coordinate for the early entry into force of the TPP, based on the agreement at the ministerial level on the TPP negotiations.

3. The two leaders exchanged views on various issues in the region including maritime security, and confirmed that Japan and Australia will continue to coordinate closely.