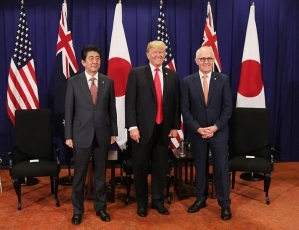 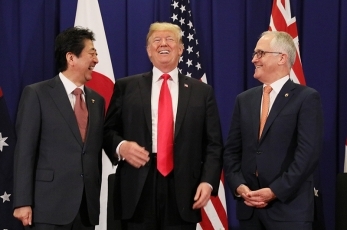 1. On November 13, commencing at around 11:05 a.m. (local time) for approximately 40 minutes, Mr. Shinzo Abe, Prime Minister of Japan, during his visit to Manila, the Philippines, to attend the ASEAN-related Summit Meetings, held a Japan-U.S.-Australia summit meeting with the Hon. Donald Trump, President of the United States, and the Hon. Malcolm Turnbull, Prime Minister of Australia (Note: A Japan-U.S.-Australia summit meeting was held for the first time in approximately three years since the previous meeting was held in November 2014 on the margins of the G20 Summit in Brisbane). The meeting was also attended by Mr. Kotaro Nogami, Deputy Chief Cabinet Secretary and others from the Japanese side, the Hon. Rex Tillerson, Secretary of State and others from the U.S. side, and Ms. Frances Adamson, Secretary of the Department of Foreign Affairs and Trade, and others from the Australian side.

2. At the meeting, discussions took place primarily on the situation in North Korea, and the leaders affirmed the unwavering solidarity of the three countries in order to lead the efforts towards ensuring peace and prosperity in the region. With regard to North Korea, the leaders affirmed that they will continue to coordinate closely based on the common understanding that it is important to utilize every measures, including the full implementation of the relevant United Nations Security Council resolutions, in order to maximize the pressure on North Korea.