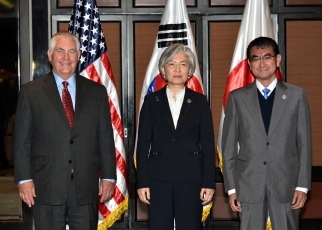 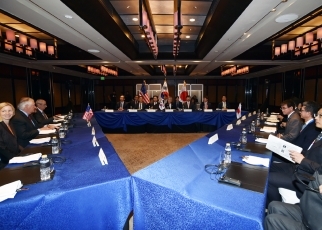 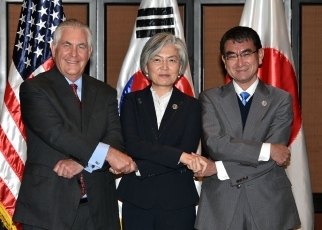 On August 7, commencing at 12:10 p.m. (local time) for approximately 45 minutes, Mr. Taro Kono, Minister for Foreign Affairs, held his first Japan-U.S.-Republic of Korea (ROK) Trilateral Foreign Ministers' Meeting since taking office with the Honorable Rex Tillerson, Secretary of State of the United States of America, and H.E. Ms. Kang Kyung-wha, Minister of Foreign Affairs of the ROK, on the occasion of his attendance at ASEAN-related Foreign Ministers’ Meetings. The overview of the meeting is as follows.

1. At the beginning, Foreign Minister Kono stated that, amidst significant increase in the threat posed by North Korea as evidenced by its launch of an ICBM-class ballistic missile on July 28, it is truly meaningful to discuss concrete measures regarding Japan-U.S.-ROK collaboration and that he appreciated the importance of the present meeting.

3. The three Ministers reconfirmed that, in dealing with the North Korea, Japan, the U.S. and the ROK will work together to ensure that the whole international community, including China, Russia and ASEAN, steadily implement the relevant United Nations Security Council(UNSC) resolutions, including UNSC Resolution 2371, and that they will coordinate future measures aimed at strengthening pressure on North Korea.

4. Foreign Minister Kono also stated that the abductions issue is the most important issue for Japan and that Japan wishes to send a strong message during ASEAN-related Foreign Ministers’ Meetings in order to realize the early resolution of the issue. In this regard, Foreign Minister Kono sought the understanding and cooperation, and obtained support from the U.S. and the ROK.