3. Rebuttal to the ROK's assertion

Japan emphatically refutes those assertions which have no solid foundation.

However, Japan cannot accept the assertion to change the name of the Sea of Japan--the name actually used in the international community--to the purely domestic ROK term "East Sea" and to make this an international standard, as the confusion would necessarily have an adverse effect on the safety of international maritime traffic. Sea of Japan is the only internationally established name, a fact for which there is no room for debate. Japan emphatically refutes the assertions of the ROK and North Korea made at the UNCSGN, IHO and other international conferences.

The International Hydrographic Organization (IHO) is an intergovernmental organization that was established in 1921 to implement technical and scientific activities designed to achieve, among other objectives, the greatest possible uniformity in nautical charts and publications (including lighthouse lists) and the promotion of the development of hydrographic survey methods and technologies for hydrographic activities. With a membership of 85 countries, the IHO is headquartered in Monaco.

2. Limits of Oceans and Seas

(1) What is Limits of Oceans and Seas?

Limits of Oceans and Seas is an IHO publication designed to serve as guidelines on the limits of oceans and seas for the benefit of national hydrographic offices in compiling nautical charts.

Limits of Oceans and Seas, from its first version in 1929 to the current version in 1953, consistently uses the only internationally established name Sea of Japan to refer to the sea area concerned.

Since the 1990s, the Republic of Korea (ROK) has been insisting that the name Sea of Japan be changed to "East Sea," or that both names be used together in governmental and commercial maps and maps for use by international organizations. In 1997, the ROK also started its claim at the IHO.

Japan has been consistently insisting that Sea of Japan is the only name that has been established both historically and internationally to refer to the sea area concerned and that there is no need or ground for any change to be made to the practice of using the name Sea of Japan. 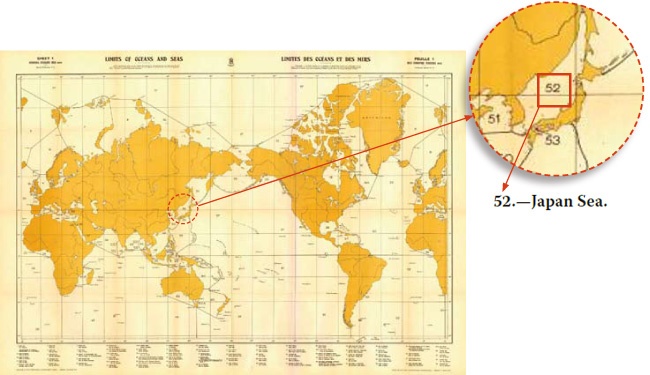 The IHO publication “Limits of Oceans and Seas” uses only the name Japan Sea for the sea area concerned.