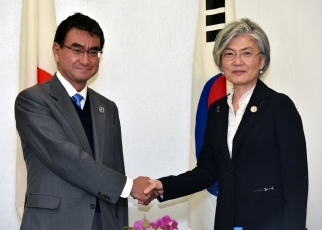 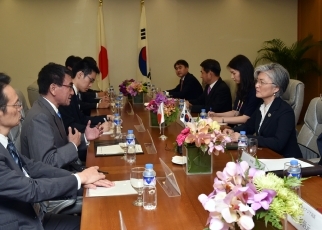 On August 7, commencing at around 7:30 p.m. (local time) for approximately 40 minutes, Mr. Taro Kono, Minister for Foreign Affairs of Japan, during his visit to Manila, the Philippines, to attend ASEAN-related Foreign Ministers' Meetings, held a Japan-Republic of Korea (ROK) Foreign Ministers' Meeting with Dr. Kang Kyung-wha, Minister of Foreign Affairs of the ROK. The overview of the meeting is as follows.

1. At the beginning, Minister Kono stated that the ROK is Japan’s most important neighbor which shares strategic interests with Japan and that he wishes to advance cooperation in a wide range of areas and build of Japan-ROK relations of a new era. He stated that he seeks to strengthen Japan-ROK and Japan-ROK-U.S. cooperation in dealing with North Korea and would like to work with Minister Kang for regional peace and stability.

2. On the issue of North Korea, Minister Kono stated that in light of North Korea’s continued provocative actions, Japan-U.S.-ROK solidarity is indispensable more than ever. He noted the importance of China’s role and he expressed his hope that Japan and the ROK work together to encourage China to perform its role. He added that it is important to ensure steady implementation of the new United Nations Security Council (UNSC) resolution and noted the need to further advance Japan-ROK and Japan-ROK-U.S. security cooperation. Both ministers confirmed the importance of close Japan-ROK and Japan-ROK-U.S. cooperation and the necessity of applying pressure on North Korea given North Korea’s continued provocative actions. Minister Kono also requested cooperation from Minister Kang towards the resolution of the abductions issue and achieved her support.