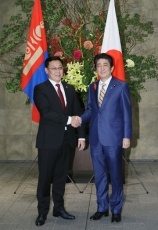 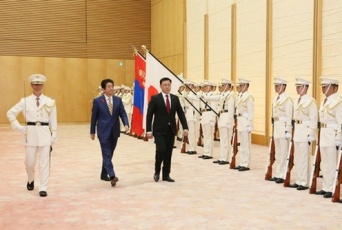 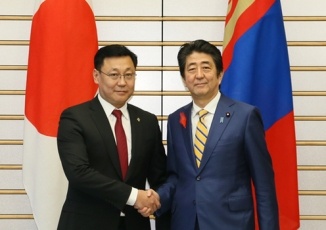 On October 14, commencing at 3:15 p.m. for approximately 50 minutes, Mr. Shinzo Abe, Prime Minister of Japan, held a Japan-Mongolia Summit Meeting with H.E. Mr. Jargaltulga Erdenebat, Prime Minister of Mongolia. The overview of the meeting is as follows. 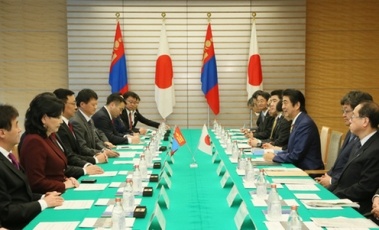 (2) The two leaders reconfirmed that Japan and Mongolia are regional partners that share fundamental values, along with sharing the view that the two countries’ economic and trade relationship will deepen as a result of steadily implementing the Japan-Mongolia Economic Partnership Agreement (EPA), which took effect in June this year. They also confirmed that they will pursue cooperation in a broad range of fields, such as agriculture, the environment, and renewable energies.

(3) Furthermore, the two leaders shared the view that based on the understanding that was reached at a summit meeting in July this year to formulate a new action plan in place of the current mid-term action plan, they will expedite work on formulating the plan and develop the strategic partnership between Japan and Mongolia into a more mutually beneficial relationship.

2. Cooperation in the international arena

Prime Minister Abe stated that North Korea’s nuclear and missile programs represent a new level of threat that requires an unprecedented response and therefore, the international community has to send a strong message that it will not tolerate any further provocative actions, and he hopes to collaborate with Mongolia on the adoption of a Security Council resolution, which includes new sanctions. Prime Minister Abe also reconfirmed Mongolia’s cooperation on promptly resolving the abductions issue. The two leaders shared the view that they will cooperate on responding to North Korea in the future also.

(2) Cooperation at the United Nations (UN)

The two leaders shared the view that they will continue to collaborate closely on UN Security Council reform.

(Reference) The new action plan between Japan and Mongolia

1. At a summit meeting in September 2013, an agreement was reached between the two countries on the Japan-Mongolia Mid-term Action Plan for a Strategic Partnership. This partnership will strengthen and advance the mutually beneficial and mutually complementary relationship for the purpose of further strengthening the strategic partnership that the two countries agreed on in 2010.