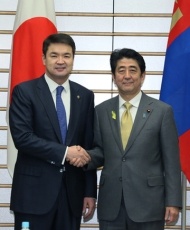 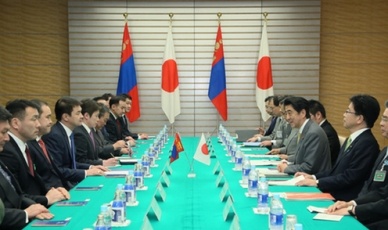 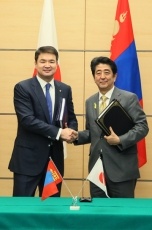 On February 10, commencing at 6:30 p.m. for approximately 30 minutes, Prime Minister Shinzo Abe held a summit meeting with Mr. Chimed Saikhanbileg, Prime Minister of Mongolia. The overview of the meeting is as follows.

In response, Prime Minister Saikhanbileg began by expressing his condolences over the Japanese nationals who lost their lives in a hostage incident in Syria. He said that Mongolia supports and appreciates the Abe Cabinet’s counter-terrorism efforts and its humanitarian support for countries in the Middle East. Furthermore, Prime Minister Saikhanbileg said that the conclusion of the EPA with Japan, which is Mongolia’s “third neighbor,” is extremely significant, and he is overjoyed that under the Japan-Mongolia Mid-term Action Plan for a Strategic Partnership agreed upon by the two leaders, tangible results, including this EPA, are steadily appearing in various fields such as politics and security, economy as well as culture and people-to-people exchanges, and going forward also, he wants to further deepen the amicable and cooperative relationship with Japan.

The two leaders both celebrated that the Japan-Mongolia EPA had reached the signing stage on this day at the end of negotiations that had lasted approximately three years, and confirmed their resolve to take the necessary respective domestic legal procedures in order to bring the EPA into force as quickly as possible.

Prime Minister Abe stated that Japan will continue to support Mongolia’s formulation of medium- to long-term economic policy, through measures including dispatching economic advisors, and explained that Japan will provide an additional yen loan of 36.85 billion yen for a new international airport that is currently under construction based by a yen loan.

Prime Minister Saikhanbileg expressed appreciation for this support from Japan, and stated that with the conclusion of the EPA as an opportunity, he wants to further vitalize bilateral cooperation in economic areas, and deepen cooperation between the two countries in economic areas regionally and in the international arena.

Prime Minister Abe said that based on the policy of Proactive Contribution to Peace, Japan will make a greater contribution to the peace and development of Asia and the world. The two leaders shared the view that the two countries will continue to cooperate closely, both regionally and in the international arena.

2. Signing ceremony and dinner hosted by the Prime Minister

Following the summit meeting, a signing ceremony was held for the Japan-Mongolia EPA, the Implementing Agreement for the EPA, and the “Joint Statement on the Signing of the Agreement between Japan and Mongolia for an Economic Partnership.” Following that a dinner was held and views were exchanged on a wide range of topics concerning the relationship between the two countries, including cultural and sports exchanges, in a very relaxed atmosphere.