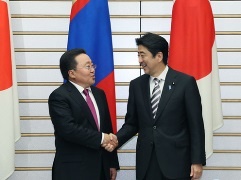 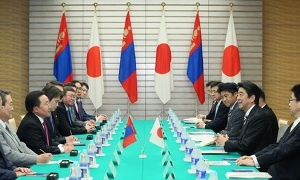 On July 22, commencing at 6:30 p.m. for approximately 30 minutes, Prime Minister Shinzo Abe held a summit meeting with H.E. Mr. Tsakhiagiin Elbegdorj, President of Mongolia. The overview of the meeting is as follows.

At the beginning, Prime Minister Abe welcomed President Elbegdorj to Japan, along with expressing his hope that the Mongolia-Japan Business Forum held jointly by Nippon Keidanren (Japan Business Federation) and the Government of Mongolia, which President Elbegdorj attended, will serve as an opportunity to further strengthen economic relations between the two countries. President Elbegdorj said he is pleased that bilateral relations are growing closer. He explained that the business forum was a success, and expressed a sense of satisfaction that he was able to hold beneficial exchanges with participants from the Japanese side on advancing bilateral economic relations further.

Both sides expressed satisfaction that an agreement in principle had been reached in the negotiations of the Japan-Mongolia Economic Partnership Agreement (EPA). They shared the view that strengthening cooperation in economic areas will be important for further enhancing the “strategic partnership,” and expressed their resolve to continue to deepen reciprocal and mutually complementary relations going forward.
Prime Minister Abe proposed the “ERCH Initiative Plus for Promoting Mongolia’s Exports and Industrial Diversification,” along with expressing the intention to encourage Mongolia’s formulation of medium- to long-term economic measures, through support that will include dispatching economic advisors, based on a request from the Mongolian side. President Elbegdorj expressed his gratitude.

Prime Minister Abe explained the Government of Japan’s security policy etc., and both sides shared the view that they will cooperate closely in order to contribute to the peace and stability of the international community.
Both sides also exchanged views on regional affairs in East Asia, including North Korea.

2. Signing ceremony and dinner hosted by the Prime Minister

Following the summit meeting, a signing ceremony was held for the “Joint statement on the agreement in principle in the negotiations of the Japan-Mongolia EPA, and the promotion of trade and investment between Japan and Mongolia.” Following that a dinner was held and views were exchanged on a wide range of topics including tourism, cultural and sports exchanges, in a very relaxed atmosphere.