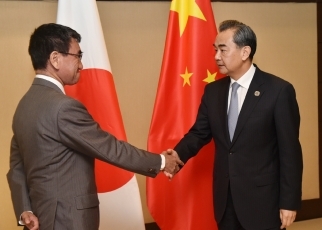 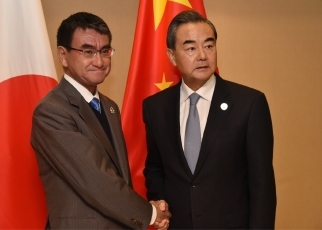 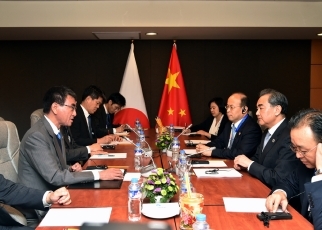 On August 7, for approximately 50 minutes (with simultaneous interpretation), starting from 5:00 p.m. (local time), Mr. Taro Kono, Minister for Foreign Affairs, who is visiting Manila, the Philippines, to attend the ASEAN-related Foreign Ministers’ Meetings, held a Japan-China Foreign Ministers’ Meeting with Mr. Wang Yi, Minister of Foreign Affairs of the People’s Republic of China. The overview of their meeting is as follows.

(1) The two foreign ministers held an open and frank exchange of views on how to move the Japan-China relations forward. In the course of the exchange, both ministers confirmed that, although there are many concerns between Japan and China, it is nonetheless important to foster Japan-China relations whereby both countries are able to jointly explore ways to work together side by side for the sake of peace, stability, and prosperity of Asia and the world.

(2) Both ministers shared the view to strengthen dialogue at the foreign ministerial level, including mutual visits, and deepen their relationship of mutual trust, as well as to advance a wide range of dialogue among the diplomatic authorities of both countries.

(3) Both ministers agreed on the importance of further promoting people-to-people exchanges, taking advantage of the milestones of the 45th anniversary of the normalization of diplomatic relations between Japan and China, and the 40th anniversary of the conclusion of the Treaty of Peace and Friendship between Japan and China, and of jointly supporting related initiatives.

2. Appropriately dealing with matters of concern

(1) Regarding the South China Sea, Minister Wang expressed the views of the Chinese side, including that the situation in the South China Sea is moving in a stable and friendly direction and that China hopes Japan will play a constructive role. In response, Minister Kono expressed the views of the Japanese side, including that Japan has consistently followed the path of a peaceful country following World War II, that Japan hopes that as China develops, it will build an attitude as a major power, that it is important to protect the freedoms of navigation and overflight of all countries, and that Japan hopes that an effective code of conduct in the South China Sea will be formulated in a transparent manner.

(2) Minister Kono raised the matter of the situation in the East China Sea. Both ministers shared the view regarding the prompt initiation of the operation of a Maritime and Aerial Communication Mechanism between Japanese and Chinese defense authorities.

(3) Minister Kono raised the matter of Japanese nationals detained in China and requested a positive response from the Chinese side.

(1) The two ministers held an open exchange of views on the issue of North Korea and agreed to continue to work closely together at the foreign ministerial level as well.

(2) Minister Kono strongly emphasized the importance of all members of the United Nations strictly implementing the recently adopted United Nations Security Council resolution and expressed his intention to work together with China in this regard.

(3) Minister Kono conveyed his expectation for the Chinese side’s understanding and support regarding the abductions issue.