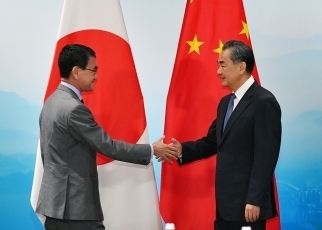 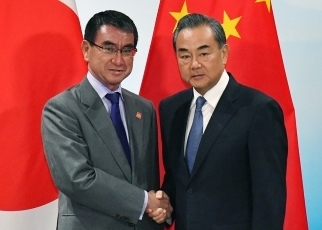 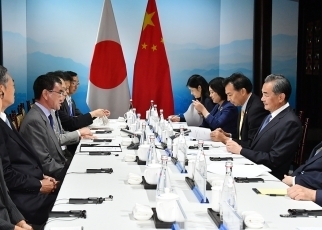 On August 20, commencing at 5:00 p.m. (6:00 p.m. JST) for approximately 45 minutes (with simultaneous interpretation), Mr. Taro Kono, Minister for Foreign Affairs of Japan, during his visit to Beijing, the People’s Republic of China to attend the Ninth Japan-China-ROK Trilateral Foreign Ministers’ Meeting, held a Japan-China Foreign Ministers’ Meeting with H.E. Mr. Wang Yi, State Councilor and Foreign Minister of the People’s Republic of China. The overview of the meeting is as follows.

(1) Both sides reaffirmed their intention to ensure that Japan-China relations develop in a stable manner through President Xi’s successful visit to Japan next spring, the first state visit to Japan in 12 years by a Chinese President.
(2) Both sides shared the recognition that it is important to keep holding continuous dialogue at various levels, and held concrete and detailed discussions regarding the diplomatic schedule thru next spring, including the Ceremony of the Enthronement of His Majesty the Emperor in October this year and the G20 Foreign Ministers’ Meeting in November.
(3) Both sides also reaffirmed the recognition that, amid significant improvements in the atmosphere of overall Japan-China relations, it was important to create constructive interaction for matters of mutual interest.
Minister Kono underscored the importance of making substantive progress on the issues of the East China Sea in order to develop Japan-China relations in a stable manner. In addition, Minister Kono once again strongly requested China’s positive responses to matters of interest to Japan, including China’s import restrictions on Japanese food products, expansion of Japanese agricultural exports to China, and detainment of Japanese nationals in China.
(4) Both sides reaffirmed that it is important to promote exchanges among the young generation, including school trips. They then exchanged concrete opinions regarding the timing for launching a high-level dialogue framework for people-to-people and cultural exchanges, among other matters.

Minister Kono expressed deep concerns over the current situation in Hong Kong, as well as strong expectations for the calming of the situation as quickly as possible in a peaceful manner through dialogue. Minister Kono stated it is important for a free and open Hong Kong to prosper under “one country, two systems.”