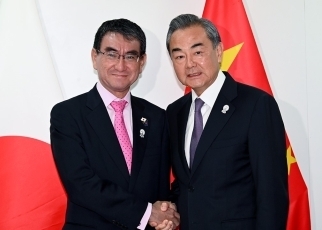 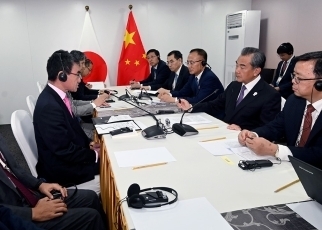 (1) Both sides welcomed that discussions on the same wavelength were held between Prime Minister Abe and President Xi at the Japan-China Summit Meeting and dinner in the margins of the G20 Osaka Summit, further deepening the relationship of trust between the leaders. Both sides shared the view that they would both make efforts towards the successful state visit to Japan by President Xi next spring.
(2) Both sides shared the recognition that it was important to keep holding continuous dialogue at various levels, and held concrete discussions regarding the diplomatic schedule for the second half of this year.
Both sides welcomed that the two countries have already held this year the Consultations on Latin America and the Caribbean, Consultations on Disarmament and Non-Proliferation, and Senior Working-Level Maritime Consultations, in accordance with the annual plan for dialogues and exchanges between diplomatic authorities prepared on the occasion of Prime Minister Abe’s visit to China in October 2018. Both sides shared the view that they would continue to actively promote dialogues and exchanges in various areas.
(3) Both sides shared the recognition that, amid significant improvements in the atmosphere of overall Japan-China relations, it was important to create constructive interaction for matters of mutual interest.
State Councilor and Foreign Minister Wang stated that China intends to advance working-level economic cooperation, noting the Japan-China High-Level Economic Dialogue held in April 2019, business cooperation in third countries, innovation cooperation, and cooperation on environmental preservation. From the perspective of promoting free trade, State Councilor and Foreign Minister Wang stated that China will aim to conclude the negotiations on the Regional Comprehensive Economic Partnership (RCEP) by the end of this year and intends to work with Japan on the Japan-China-ROK free trade agreement (FTA).
Minister Kono once again strongly requested China’s positive responses to: (1) the issues of the East China Sea, including intrusion of Chinese government vessels into Japan’s territorial waters surrounding the Senkaku Islands and implementation of the “2008 Agreement” regarding resource development; (2) China’s import restrictions on Japanese food products and expansion of Japanese agricultural exports to China; and (3) detainment of Japanese nationals in China.
(4) Both sides reaffirmed that they would continue to coordinate on a high-level dialogue framework for people-to-people and cultural exchanges, on which their leaders agreed to launch by the end of the year, and that it was important to promote exchanges among the young generation, including school trips. Minister Kono explained that Japan intends to make tourism to Japan more convenient through its recently approved introduction of online visa applications and electronic visas.