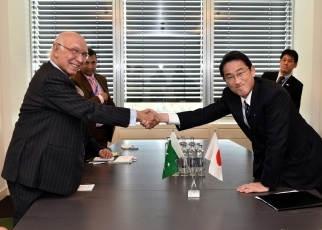 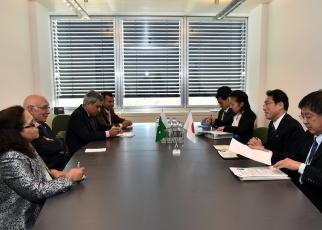 At the beginning, Minister Kishida expressed his delight at being able to hold the first foreign ministers' meeting after the establishment of the Sharif Administration, and conveyed his condolences over the large number of casualties caused by the earthquake in the northern Pakistan on October 26.
In response, Advisor to the Prime Minister Aziz explained that he attaches a great  importance to this foreign ministers' meeting, and expressed his gratitude for the condolences extended by Japan, including Minister Kishida, over the recent earthquake.

Minister Kishida explained the concept of ''Proactive Contribution to Peace'' based on the principle of international cooperation, and the Legislation for Peace and Security that was enacted recently, and expressedhis gratitude for the strong support extended by Pakistan.

Minister Kishida stated that Japan supports the efforts for the economic and fiscal reform by the Sharif Administration, and is considering support in the field of electric power and on the eradication of  polio, which are priority issues for Pakistan. He also expressed the view that Japan supports Pakistan's efforts to improve the security, including counterterrorism measures, and intends to cooperate on Pakistan's peace and development. In addition, Minister Kishida explained that he hopes that the ''Pakistan-Japan Government Business Joint Dialogue'' which will be held for the first time in three and a half years on November 10 in Islamabad will lead to the further developmentof bilateral economic relations including trade and investment.
In response, Advisor to the Prime Minister Aziz explained that as a result of the focus on issues such as terrorism and security since the  9.11 terrorist attacks in 2001, economic relations with Japan such as trade and investment had been stagnating, but the time when the security issue is dominant is nearly over. He expressed that the Government of Pakistan hopes to significantly develop economic relations with Japan by working on 1) counterterrorism; 2) democratization; 3) economic policies; 4) regional connectivity, and 5) improving relations with neighboring countries.

Page Top
Back to Japan-Pakistan Relations