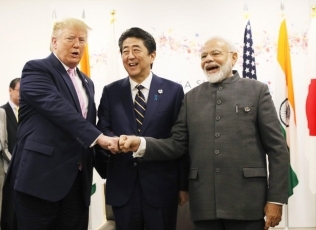 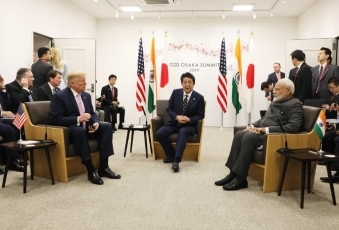 Japan, the United States and India are partners in the Indo-Pacific that share fundamental values such as freedom, democracy and the rule of law. At the meeting, the leaders reaffirmed the critical importance of their trilateral cooperation in efforts to maintain and promote a free and open Indo-Pacific region, sharing their understanding of an increasingly complex security situation.

The three leaders confirmed their views to further promote the trilateral cooperation in various fields, such as maritime security, security in new domains including space and cyberspace, and quality infrastructure investment. With regard to quality infrastructure investment, the leaders welcomed the G20 Principles for Quality Infrastructure Investment to be endorsed at the G20 Osaka Summit and confirmed their will to continue to cooperate to promote the Principles to the international community.

The three leaders decided to continue exchanges in the trilateral framework.