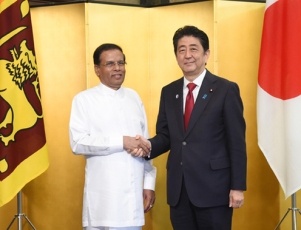 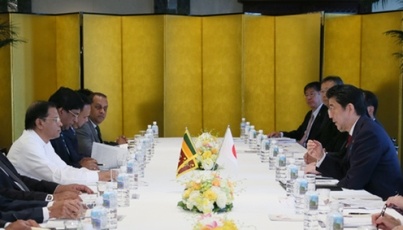 . The overview of the meeting is as follows.

1. Prime Minister Abe welcomed President Sirisena on his first visit to Japan as President, and expressed his gratitude for President Sirisena's contributions at the Outreach Meeting. Prime Minister Abe also highly appreciated that Sri Lanka's new government is advancing national reconciliation, good governance and economic reform, and stated that Japan would continue to actively cooperate with the new government's nation-building efforts. President Sirisena responded that he was pleased to be able to visit Japan and it was a great honor to have such an opportunity for Sri Lanka to attend a G7 summit for the first time.

2. Prime Minister Abe stated that Japan would also strengthen cooperation with Sri Lanka through the initiative ''Expanded Partnership for Quality Infrastructure.'' Prime Minister Abe expressed his intention to provide ODA loans, which amount to approximately 38 billion yen, for the construction of national transmission and distribution and water supply facilities in Anuradhapura District, and stated that Japan would promote the development of Colombo port and its vicinity through publicand private sector cooperation. President Sirisena expressed his gratitude for Japan's longstanding support for Sri Lanka, and for Japan's assistance for the development of transmission facilities, and expressed his intention to cooperate with Japan to develop port facilities. President Sirisena also stated that the new government was advancing economic reform and promoting Sri Lanka's export industries.

3. The two leaders, recognizing the fact that a common understanding had been made over the importance of open and stable seas at the G7 Outreach Meeting, agreed to further promote bilateral maritime cooperation, and welcomed Japan's decision on the provision of  two patrol vessels to Sri Lanka.

4. Prime Minister Abe expressed his appreciation for Sri Lanka's efforts to achieve national reconciliation, as well as his expectation for further concrete progress. President Sirisena stated that the new government's determination to achieve national reconciliation and peacebuilding, and expressed that Sri Lanka must never fall into internal war again.

5. The two leaders decided to establish a Joint Committee between the two countries, and to swiftly implement the Comprehensive Partnership between Japan and Sri Lanka.