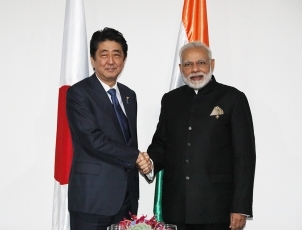 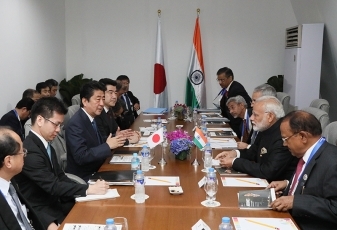 On November 14, from 11:00 a.m. (local time) for approximately 40 minutes, Mr. Shinzo Abe, Prime Minister of Japan, held a Japan-India Summit Meeting with H.E. Mr. Narendra Modi, Prime Minister of India in the margins of the ASEAN-related Summit Meetings in Manila, the Philippines. This was the 11th meeting between the two leaders. The overview is as follows.

1. Prime Minister Abe expressed his appreciation for the tremendous welcome he had received on his visit to India in September. He further expressed his hope to fully achieve the potential in Japan-India relations on all fronts, work closely together with Prime Minister Modi to realize a free and open Indo-Pacific based on the rule of law, and advance the “new era in Japan-India relations.” Prime Minister Abe also conveyed his condolences for the missing Indian crew members of a cargo vessel that had been lost in the seas south of Okinawa.

In response, Prime Minister Modi thanked Prime Minister Abe for his message of condolences. He further expressed his appreciation for Prime Minister Abe’s visit to his home state of Gujarat in September, noting that the visit marked a historical moment that deeply impressed the people of India. He noted that India will continue to cooperate with Japan towards the realization of a free and open Indo-Pacific region.

2. Based on the outcomes of Prime Minister Abe’s visit to India in September, the two leaders had a candid exchange of views on a variety of issues, including high-speed rail, US-2 amphibian aircraft, connectivity, people-to-people exchanges, and regional affairs.

(2) Prime Minister Abe expressed his hope that prompt and concrete progress will be made concerning cooperation on the US-2 amphibian aircraft. The two leaders agreed to continue discussion on this matter.

(3) Prime Minister Abe expressed his hope to further concretize two countries’ initiatives to strengthen connectivity, including through the development of quality infrastructure. The two leaders agreed to continue close cooperation in this regard.

(5) Prime Minister Abe, referring to North Korea’s nuclear and missile development, stated that based on the Japan-India Joint Statement issued in September, pressure should be maximized in order to corner North Korea to sit on a negotiation table with denuclearization as a premise. He further noted the importance of China playing a bigger role in responding to North Korea. Prime Minister Abe also sought understanding and cooperation for the early resolution of the top-priority abductions issue. Prime Minister Modi stated that North Korea is a threat to the region and that it is necessary to fully implement United Nations Security Council (UNSC) resolutions. The two leaders confirmed that Japan and India will work closely together on this issue.