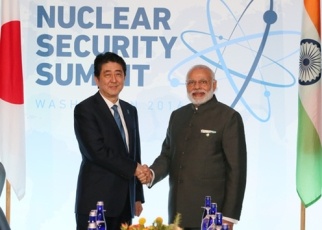 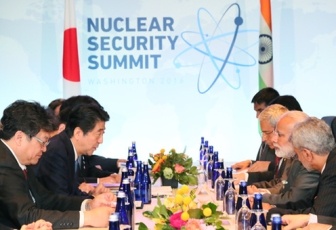 1. Mr. Shinzo Abe, Prime Minister of Japan, who is visiting Washington D.C. to attend the Nuclear Security Summit, held a meeting with H.E. Mr. Narendra Modi, Prime Minister of the Republic of India on Friday, April 1, from 4:40 p.m. to 5:00 p.m. (this was the sixth meeting between the two leaders).

2. In the opening remarks, Prime Minster Abe expressed his condolences to the victims of the overpass collapse at Kolkata and his appreciation to Prime Minister Modi for the warm reception during his visit to India in December 2015. Prime Minister Abe also noted that the Indian economy, which is steadily developing under the leadership of Prime Minister Modi, is a driver of global growth, and that Japan would like to work closely with India in light of the need for policy coordination among major countries in order to realize sustainable and strong growth, amid growing uncertainty in the global economy.

3. The two leaders exchanged their opinions on strengthening the bilateral relationship and had a frank discussion aimed at further reinforcement of cooperation in dealing with regional affairs and international issues in order to steadily keep tracking the outcome of Prime Minister Abe’s visit to India in December 2015 that marked the “new era in Japan-India relations,” and to lead to achievement for the visit by Prime Minister Modi to Japan planned to take place within this year.

4. Regarding the fight against terrorism, Prime Minister Abe stated that he feels great shock and anger at the terror attacks in Brussels and Lahore and strongly condemns vicious terrorism, and that Japan, as the G7 Presidency, is taking assertive actions to strengthen measures to deal with terrorism and violent extremism. Prime Minister Modi expressed his expectations for initiatives by G7 against terrorism and indicated the importance of firmly dealing with specific terrorism cases.

6. Regarding disarmament and non-proliferation, Prime Minister Abe explained that Japan would like to work with India to achieve a “world without nuclear weapons,” and that initiatives of India’s disarmament and non-proliferation are important for nuclear cooperation. He also noted that Japan attaches importance to the universalization of Treaty on the Non-Proliferation of Nuclear Weapons (NPT), the prompt entry into force of the Comprehensive Nuclear Test Ban Treaty (CTBT) and the prompt commencement of negotiations on a Fissile Material Cut-off Treaty (FMCT), and intends to continue dialogue on these issues.

7. Finally, the two leaders shared their views on the need for Japan and India to cooperate and take initiatives toward peace and prosperity in Asia and the world, and Prime Minister Abe noted that he is looking forward to the visit to Japan by Prime Minister Modi this year.