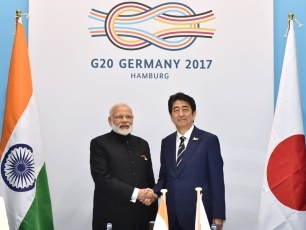 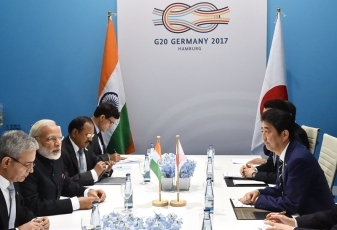 1 Mr. Shinzo Abe, Prime Minister of Japan held a meeting with H.E. Mr. Narendra Modi, Prime Minister of India on July 7 from 3:05 p.m. to 3:40 p.m. in Hamburg, Germany, which the leaders were visiting in order to attend the G20 Summit. The bilateral meeting was the ninth meeting between the two leaders.

3 Prime Minister Abe stated that together with Prime Minister Modi he wanted to dramatically enhance the "new era in Japan-India relations" and lead the peace and prosperity of the Indo-Pacific region and the world, and that on the coming visit to India he would materialize the cooperation regarding the "Free and Open India and Pacific Strategy" and "Act East" policy. In response to this, Prime Minister Modi stated that both Japan and India play large roles in building an order of democracy and the rule of law, and that he wanted to further strengthen Japan-India cooperation.

4 After that, the two prime ministers held a candid exchange of views regarding the major issues between Japan and India, including politics and security, high-speed rail, the economy and economic cooperation, etc., and about the regional situation.

(3) Regarding the high-speed railway between Mumbai and Ahmedabad, the two prime ministers agreed to make steady progress in order to be able to show specific outcomes promptly.

(4) The two prime ministers agreed that candid discussions between the leaders regarding the various issues in the region are important, and confirmed that they would exchange further information regarding the issues surrounding North Korea, etc. and that they would cooperate closely to make the sanctions by the international community effective.