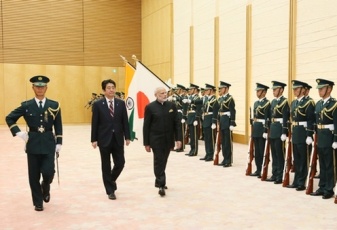 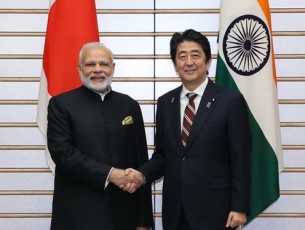 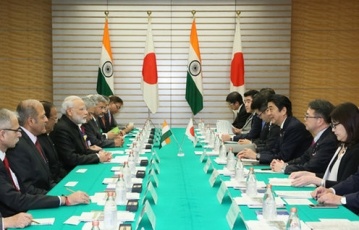 Prime Minister Abe stated that this summit meeting was a magnificent meeting that substantially advanced the "new era in Japan-India relations," and he hoped the two countries would lead the prosperity and stability of the Indo-Pacific region as a result of coordinating the "Free and Open India and Pacific Strategy" and the "Act East" policy.

Prime Minister Modi expressed his gratitude for Prime Minister Abe's warm hospitality, and stated that he was overjoyed that the Global Partnership between Japan and India was steadily progressing and generating results.

Prime Minister Abe stated that he expressed his pleasure over the signature of the  Agreement between the Government of Japan and the Government of the Republic of India for Cooperation in the Peaceful Uses of Nuclear Energy was signed on the same day, and explained that future nuclear energy cooperation would be based on India's commitment to a unilateral and voluntary moratorium on nuclear testing, and Japan appreciated that India was maintaining its commitment. Prime Minister Abe noted that Japan already shared the goal of realization for "a world without nuclear weapons" with India, and hoped to deepen cooperation in the field of disarmament and nonproliferation. Prime Minister Abe stated that Japan attached importance to the universalization of the Treaty on the Non-Proliferation of Nuclear Weapons (NPT), the prompt entry into force of the Comprehensive Nuclear-Test-Ban Treaty (CTBT), and the prompt commencement of negotiations on the Fissile Material Cutoff Treaty (FMCT), and also intended to continue to hold dialogue for the purpose of advancing these issues.

Prime Minister Abe expressed his intention to further promote cooperation on defense equipment and technology, including the strategically important US-2 amphibian aircraft.

Prime Minister Modi stated that changes to the security environment surrounding Asia's oceans had been progressing at a rapid pace, and India attaches importance to maritime security cooperation with Japan. Prime Minister Modi noted that the maritime field in particular was challenging, and that taking measures with like-minded countries was important. Prime Minister Modi explained that based on the "Act East" policy India was advancing cooperation with the Association of South East Asian Nations (ASEAN) members, and that he believed it would be important for Japan and India to proceed with connectivity projects. Prime Minister Modi expressed the view that the US-2 amphibian aircraft was technically impressive, explained that India was making considerations from the standpoints of specific needs and the life-cycle costs, and stated that he intended to further advance the discussions between the Indian and Japanese authorities.

The two leaders confirmed that the General Consultant would start its work in December 2016, the construction work would begin in 2018, and the railway's operation would commence in 2023.

Prime Minister Abe explained initiatives such as the establishment of the Japan-India Institute for Manufacturing (JIM), providing Japanese style manufacturing skills and practices, in an effort to enhance India's manufacturing industry base, and the launch of "Innovative Asia," a human resources development project utilizing Official Development Assistance (ODA).
With regard to other areas of the economy and economic cooperation, Prime Minister Abe requested India's early decision on introducing special incentive packages in Japanese industrial townships, asked for discussions to be held on support for expanding local production of environmentally-friendly vehicles in order to popularize them, and explained Japan's support for constructing the Varanasi Convention Center.

Prime Minister Modi stated that economic reform was important to India, and where Japan was concerned cooperation on granting incentives to Japanese industrial townships was moving forward. Prime Minister Modi greatly welcomed the establishment of JIMs by Japanese companies, and expressed his hope that they would give more Indian students the ambition to study the Japanese language. Prime Minister Modi expressed gratitude for Japan's consideration of support for the Varanasi Convention Center, and stated that he hoped to continue to work together to advance it.

Prime Minister Abe discussed a further easing of visas in order to increase the number of Indian tourists visiting Japan, the establishment of a Japan National Tourism Organization office in Delhi, sister city exchanges, including the signing of a memorandum of understanding on exchanges between Hyogo Prefecture and the State of Gujarat, and expert exchanges.

In response, Prime Minister Modi welcomed the moves to strengthen ties between Hyogo and Gujarat, his home state.