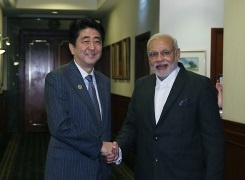 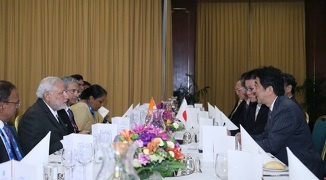 Prime Minister Shinzo Abe held a summit meeting with H.E. Mr. Narendra Modi, Prime Minister of India over dinner on November 14, from 8:00 p.m. to 9:30 p.m. for approximately 90 minutes in Brisbane, Australia, where Prime Minister Abe was staying to attend the G20 Summit. The overview of the meeting is as follows.

Prime Minister Abe expressed his hope that the meeting between defense ministers of Japan and India would be held at an early date. The two leaders also shared the view on the holding of the secretary-level 2 plus 2 dialogue at an early date and on the promotion of the discussion regarding cooperation for the US-2 amphibian aircraft among others.

(ii) Improvement of the business environment
Prime Minister Abe said that he wanted to continue to cooperate with India toward achieving their common goal of doubling Japan’s direct investment and the number of Japanese companies in India. He stated that he highly appreciated the launch of Japan Plus and strongly hoped that it would function effectively. In response, Prime Minister Modi said that he takes control of Japan Plus and good effect can be expected from it.

(iii) Other items
Prime Minister Abe expressed his hope that the high speed railway between Mumbai and Ahmedabad would become the first case in which Japan’s Shinkansen system is introduced in India. He also requested support for high efficiency and low carbonization of coal-fired power generation, which is the key to addressing climate change and promoting economic development. In response, Prime Minister Modi expressed his hope for Japan’s flexible support for the Shinkansen system and the Ahmedabad Metro.

(1) Prime Minister Abe stated that he wanted to add to Japan-India relations a standpoint of contributing to the stability and development of “Indo- Pacific” and also mentioned that he attached importance to Japan-U.S.-India and Japan-Australia-India cooperation. Prime Minister Modi expressed his approval for this.

(3) Regarding North Korea, Prime Minister Abe explained Japan’s consistent position of aiming for a comprehensive resolution to the various issues, including nuclear, missile, and abductions issues. He also explained the current situation of Japan-North Korea relations including the recent dispatch of government officials to Pyongyang in relation to the abductions issue. Further, Prime Minister Abe requested support for the Resolution on the situation of human rights in the Democratic People’s Republic of Korea.

(4) Also, Prime Minister Abe stated that looking ahead to the 70th anniversary of the creation of the United Nations, Japan wanted to further strengthen cooperation with India to achieve concrete results. Prime Minister Modi expressed his support for this.

(5) With regard to the WTO, Prime Minister Abe stated that he appreciated India’s decision toward maintaining and strengthening a multilateral trade system and that he wanted to make the Regional Comprehensive Economic Partnership (RCEP) a comprehensive and high-level agreement. In response, Prime Minister Modi said that with regard to trade agreements, he hoped to cooperate with related countries in order to help address the concerns held by countries such as India.