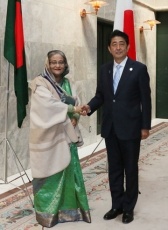 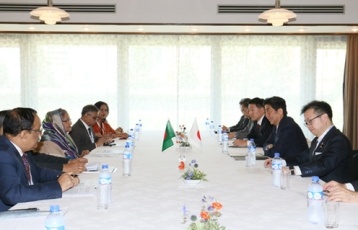 On Friday, July 15, commencing at around 11:40 am (local time) for approximately 20 minutes, Mr. Shinzo Abe, Prime Minister of Japan, held a meeting with H.E. Sheikh Hasina, Prime Minister of the People's Republic of Bangladesh, during his visit to Mongolia attending the 11th Asia-Europe Meeting (ASEM 11) Summit Meeting. The overview of the meeting is as follows.

1. In his opening remarks Prime Minister Abe stated the following.

(1) I deeply regret the loss of many precious lives in the terrorist attack in Dhaka. Terrorism cannot be justified for any reason, and Japan strongly condemns this attack. I extend my condolences again for the Bangladeshi people who lost their lives and would like to express strong solidarity with Bangladesh.

(2) Japan hopes that the ASEM 11 Summit Meeting will send a clear message to the international community that terrorism is absolutely unacceptable.

(3) The Japanese victims were all involved in development assistance, and the loss of their lives is extremely regrettable. Japan will continue its ODA for Bangladesh to carry on the spirit of the victims. Japan requests a thorough investigation of the facts, sharing of related information, and strict punishments for the perpetrators. Japan also hopes for full-fledged cooperation to ensure the safety of Japanese people residing in and traveling to Bangladesh and to prevent recurrence.

(4) It is necessary to secure the safety of assistance-related personnel and other Japanese people in order to minimize the impact on initiatives by Japanese people and investment policies. Japan has also started a review at the Council on Safety Measures for International Cooperation Projects led by Mr. Fumio Kishida, Minister for Foreign Affairs of Japan. I request the kind cooperation of Prime Minister Hasina in these efforts.

(5) Today’s incident in Nice is also suspected of being an act of terrorism, and Italians were killed in the terrorist attack in Dhaka as well. I believe that it is important for Asia and Europe to work together to combat terrorism.

(1) I was deeply shocked and saddened by the terrorist attack in Dhaka and would like to express my heartfelt condolences for the seven Japanese victims to Prime Minister Abe, the Japanese people, and the bereaved families.

(2) The Japanese victims were working to promote Bangladesh’s development and advancement, and Bangladesh is greatly saddened by this loss. Terrorists remain terrorists regardless of their country or religion. The ASEM 11 Summit Meeting should issue a strong message that terrorism is unacceptable. Prime Minister Abe’s speech at the ASEM 11 Summit Meeting delivered a strong message.

(3) I would like to express my respect for Prime Minister Abe’s bold decision immediately after this incident for Japan to continue ODA activities. I have already instructed law enforcement agencies and military forces directly under my control to take all possible measures to ensure the safety of Japanese people and other foreigners. Bangladesh is responding not only through law enforcement agencies, but also with the cooperation of the people of Bangladesh as a whole.

(4) Although the perpetrators of the terrorist attack were killed, Bangladesh is conducting an investigation into the underlying causes, including benefactors, funding, arms supply, and training, and plans to share all of the information it possesses on terrorism with Japan.

(5) Bangladesh will cooperate fully with Japan to combat terrorism and ensure the safety of the Japanese people.