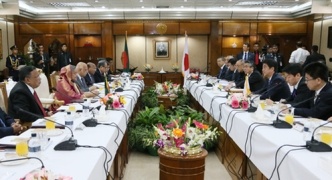 Prime Minister Shinzo Abe held a summit meeting with H.E. Sheikh Hasina, Prime Minister of the People's Republic of Bangladesh, on September 6, from 4:00 p.m. to 5:00 p.m. The overview of the meeting is as follows:

Prime Minister Abe appreciated Bangladesh's contribution to the international community through Peacekeeping Operations (PKO) and welcomed the progress in the cooperation toward the training of PKO personnel by Japan. In response, Prime Minister Hasina stated that Japan and Bangladesh share various interests and she would like to cooperate with Japan in the fields of anti-terrorism and PKO. Prime Minister Hasina mentioned that she hopes to realize a foreign secretary level consultation next year to advance dialogue between the two countries.

Prime Minister Abe explained that the Government of Japan has been implementing policies to realize a society in which women shine. Moreover, Prime Minister Abe conveyed his intention to promote Japanese studies in Bangladesh in cooperation with the Japan Study Center of Dhaka University. Prime Minister Hasina mentioned that Dr. Shirin Sharmin Chaudhury, the Speaker of Bangladesh Parliament, would participate in the World Assembly for Women in Tokyo (WAW! Tokyo 2014) in September.

5.Election of the non-permanent members of United Nations Security Council in 2015

Touching upon the fact that Japan and Bangladesh have historically enjoyed a very friendly relationship since the independence of Bangladesh, Prime Minister Hasina said that Bangladesh would support Japan's candidature and withdraw its candidature for the election of the non-permanent members of United Nations Security Council in 2015 for the sake of the further enhancement of the bilateral relationship. Prime Minister Abe expressed his deep gratitude for the decision and highly appreciated it. Prime Minister Abe also stated that this bold decision elevates the Japan-Bangladesh relationship to a higher level and he would like to further strengthen cooperation with Bangladesh in the international arena.