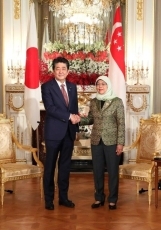 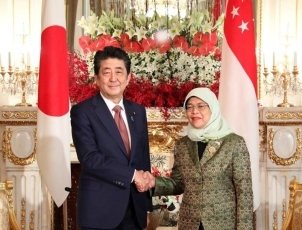 On October 23, commencing at around 8:20 a.m. for approximately 15 minutes, Mr. Shinzo Abe, Prime Minister of Japan, held a meeting with H.E. Halimah Yacob, President of the Republic of Singapore. The overview of the meeting is as follows. The meeting was also attended by Mr. OKADA Naoki, Deputy Chief Cabinet Secretary, Mr. HAYASHI Hajime, Assistant Chief Cabinet Secretary, and Mr. HASEGAWA Eiichi, Special Advisor to the Prime Minister and Cabinet Public Relations Secretary from the Japanese side, and by H.E. Mr. LUI Tuck Yew, Ambassador Extraordinary and Plenipotentiary of Singapore to Japan from the Singapore side.

Prime Minister Abe welcomed the visit to Japan by President Halimah Yacob and stated, “It is an honor for me to be able to welcome you to Japan on your first visit in your position as President of Singapore,” and “I would like to express my sincere appreciation for the kind message of condolences we received from Prime Minister Lee Hsien Loong concerning the damage caused by Typhoon Hagibis.”
In response, President Halimah Yacob stated, “Congratulations on the Ceremony of the Enthronement,” adding “It is a great honor to have attended the ceremony.” President Halimah Yacob also stated, “I would like to express my condolences for the loss of lives caused by Typhoon Hagibis and would also like to extol the resilience the people of Japan has shown during this time of hardship.”

Prime Minister Abe stated, “Japan and Singapore share much in common in terms of challenges and policies, including measures aimed at the creation of Smart Cities, initiatives to respond to declining birthrates, as well as casino operation through the promotion of integrated resorts,” and “I hope that we can continue to advance cooperation in various fields, including infrastructure cooperation in third countries and also through the Japan-Singapore Partnership Programme for the 21st Century (JSPP21).”
In response, President Halimah Yacob stated, “I would like to continue to facilitate cooperation with Japan in dealing with various fields such as aging society, expatriate labor force, Smart City and infrastructure cooperation in third countries.”
Prime Minister Abe requested understanding and cooperation towards the early resolution of the abduction issue.

Prime Minister Abe expressed appreciation for Singapore’s efforts relating to the TPP 11and RCEP, and both Prime Minister Abe and President Halimah Yacob shared the need to continue to work together on the steady implementation and expansion of TPP 11, early conclusion of RCEP and WTO reform.

Prime Minister Abe noted that the Abe Cabinet is committed to efforts to realize a “society in which women shine,” and that President Halimah Yacob, who had previously served as the Speaker of the Parliament of Singapore before becoming Singapore’s first-ever female President, is a “true role model,” and that he hoped for the President’s continued success.