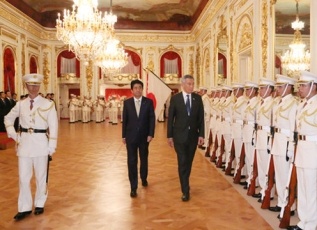 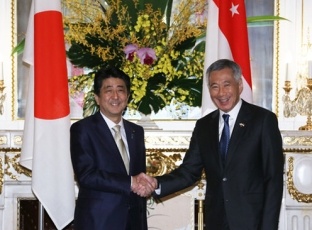 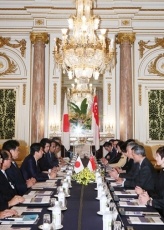 (1) At the outset, Prime Minister Abe warmly congratulated the milestone year of the 50th anniversary of the establishment of diplomatic relations between the two countries this year

In response, Prime Minister Lee expressed gratitude for the warm welcome extended to him during his visit to mark the establishment of 50th anniversary of diplomatic relations between the two countries as well as appreciation for Prime Minister Abe’s having paid his last respects to Singapore’s former President S R Nathan on his demise. While expressing his appreciation for Japan’s invitation to Singapore’s President Tony Tan to make a State Visit in November 2016, Prime Minister Lee stated that he was very honoured to receive the posthumous award of the Grand Cordon of the Order of the Paulownia Flowers on behalf of the late founding Prime Minister Lee Kwan Yew, commenting that the award was a great honour not only to the laureate and his family but also to Singapore as a whole.

(2) Prime Minister Abe commented that it was an honor to have the opportunity to pay respects to the late former Singapore President Nathan on the occasion of his demise last month. Prime Minister Abe also noted with appreciation that the current visit of Prime Minister Lee and the upcoming State Visit of President Tony Tan in November are highlights in commemorating the Japan-Singapore 50th anniversary of the establishment of diplomatic relations.

(3) Prime Minister Abe expressed strong expectations for Singapore to adopt Japan’s Shinkansen system as a symbol of cooperation between the two countries , while expressing interest in strengthening collaboration with Singapore on development of LNG bunkering facilities.

In response, on the high-speed railway project, Prime Minister Lee explained that Singapore has been working with Malaysia, including the signing of the Memorandum of Understanding in Judy 2016, to ensure an objective and transparent selection in order to introduce the best possible train sets and system. Prime Minister Lee also said that Singapore is interested in discussing cooperation in LNG bunkering. Both leaders agreed on holding a Vice-Minister level meeting from the related Ministries to strengthen bilateral cooperation in land, sea and air transport and infrastructure.

(4) Moreover, Prime Minister Abe commended the broadening of the range of economic cooperation under the Japan-Singapore Economic Partnership Agreement (JSEPA), which is Japan’s first bilateral EPA, and welcomed the signing of the two memoranda of cooperation in the areas of trade and investment as well as urban development on this occasion. He also commended that the memoranda on the areas of tourism, intellectual property, and the science and technology which had been already signed this year illustrates the expansion of the range of economic cooperation between the two countries. The two leaders also agreed to cooperate for early entry into force of the TPP. In response, Prime Minister Lee explained that the memoranda being signed this time demonstrate a broad range of economic cooperation between the two countries and serve the best interests of the two countries. Emphasizing that there is still more that both countries can do together to enhance the Japan-Singapore EPA, Prime Minister Lee expressed desire to further cooperate in this area.

(5) Furthermore, Prime Minister Abe expressed interest in further promoting collaboration through bilateral dialogue on maritime security. He also expressed desire to further countermeasures against piracy and armed robbery against ships in Asia through the ReCAAP (Regional Cooperation Agreement on Combating Piracy and Armed Robbery against Ships in Asia) information sharing center, which is in its 10th year, and to expand defense exchanges and cooperation. In response, Prime Minister Lee stated that the two countries have a shared interest in cooperating for the regional stability from a strategic perspective and that he supports Japan’s policy of Proactive Contribution to Peace and its peace and security legislation in this context.

(6) The two leaders also discussed the situation in the South China Sea and confirmed the importance of the rule of law and collaboration by the international community. On North Korea, the two leaders agreed to take resolute stance against North Korea, including strict implementation of the UN Security Council resolutions, in relation to its repeated nuclear weapon tests and ballistic missile launches.

2. Presentation Ceremony of the Conferment of the Grand Cordon of the Order of the Paulownia Flowers 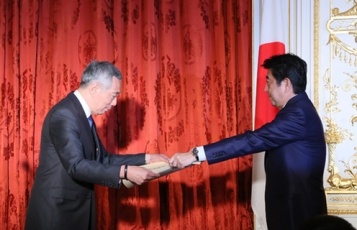 In response, Prime Minister Lee stated that Singapore is deeply honoured and is much obliged to the Government of Japan and people of Japan. He also commented that former Prime Minister Lee Kwan Yew placed emphasis on strengthening and developing ties with Japan and adopted a constructive approach to developing bilateral ties from the very early days of Singapore’s independence, which laid a solid foundation for the close relations of friendship enjoyed by both countries today. He also noted his desire to take the bilateral relations to even greater heights.

3. Ceremony for the Exchange of Signed Documents, Joint Press Announcement, and Banquet Hosted by Prime Minister Abe and His Spouse

(1) Ceremony for the Exchange of Signed Documents

After the presentation ceremony, the exchange of the following three documents witnessed by the two leaders. 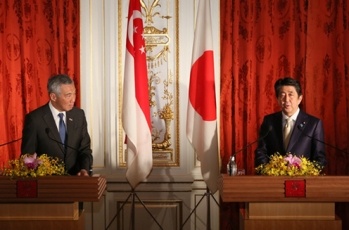 After the ceremony for the exchange of signed documents, the two leaders held a joint press announcement. 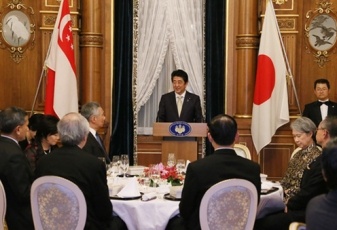 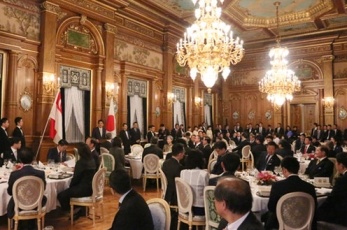 This was followed by a banquet hosted by Prime Minister Abe and his spouse attended by approximately 60 invitees who have ties with Singapore. It was held in a very warm and friendly atmosphere, celebrating together the 50th anniversary of establishing diplomatic ties between the two countries with broad-ranging discussion on the bilateral relationship, including cultural and people-to-people exchanges.