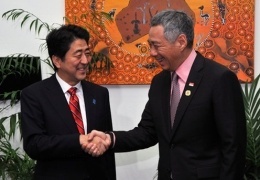 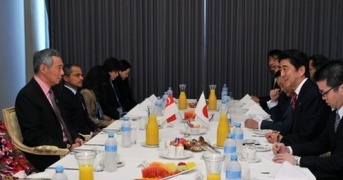 Photo: Cabinet Public Relations Office
On November 17, commencing at 7:25 a.m. (local time) for approximately 45 minutes, Mr. Shinzo Abe,the Prime Minister of Japan, held a meeting over breakfast with H.E. Mr. Lee Hsien Loong, Prime Minister of the Republic of Singapore, in Brisbane, Australia, on a visit to attend the G20 Summit. The overview of the meeting is as follows.

Prime Minister Abe said this was the fourth time he had met Prime Minister Lee this year, and welcomed the close communication between the two countries.

(1) Politics and security
Prime Minister Abe explained the Cabinet decision on basic policies on the development of security legislation in July, and said Japan would make a greater contribution to regional peace and stability by promoting the “proactive contribution to peace” initiative that Prime Minister Lee expressed support for at the Summit Meeting in May. Prime Minister Abe also vowed greater engagement with strengthening support for peace-building, national reconciliation and democratization in Asia. Prime Minister Lee welcomed Japan’s initiatives.
(2) The economy and economic relations
Prime Minister Abe explained that he would continue to pursue structural reforms in an effort to revitalize Japan’s economy, which is a top priority issue of his administration.
Additionally, Prime Minister Abe conveyed strong expectation that Japan’s Shinkansen system would be adopted for a high-speed railway project, so that the cooperation between the two countries will be symbolized. In response, Prime Minister Lee said he highly appreciates the capabilities of the Shinkansen System and hopes Japan will put forward a good proposal in the tender.
Furthermore, the two leaders shared the view that they would continue to coordinate in connection with negotiations over the Trans-Pacific Partnership (TPP) and Regional Comprehensive Economic Partnership (RCEP) agreements.