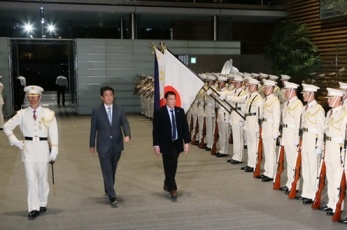 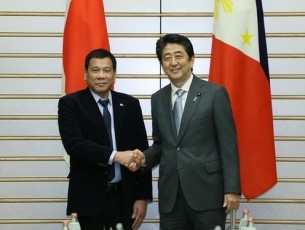 Photo: Cabinet Public Relations Office
On October 26, commencing at around 6:00 p.m. for approximately 30 minutes, Mr. Shinzo Abe, Prime Minister of Japan, held a Japan-Philippines Summit Meeting with H.E. Mr. Rodrigo R. Duterte, President of the Republic of the Philippines, who is making an official visit to Japan. The overview is as follows. This meeting was also attended by Mr. Koichi Hagiuda, Deputy Chief Cabinet Secretary, Mr. Katsuyuki Kawai, Special Advisor to the Prime Minister, and others.

The outcomes of this meeting have been announced in the form of a "Japan-Philippines Joint Statement."（PDF） 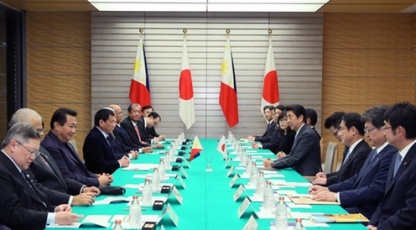 Photo: Cabinet Public Relations Office
(1) At the start of the meeting, Prime Minister Abe sincerely welcomed President Duterte's first visit to Japan as president and stated that he is happy to be able to meet again following their previous meeting in Vientiane, Laos last month. Prime Minister Abe added that this year marks the 60th anniversary of the normalization of diplomatic relations between Japan and the Philippines, that in January of this anniversary year, Their Majesties the Emperor and Empress of Japan visited the Philippines, that President Duterte was recently welcomed to Japan on another occasion, and that based on President Duterte's current visit to Japan, he intends to dramatically develop relations between Japan and the Philippines.

In response to this, President Duterte stated that he is grateful for the invitation to Japan, that Japan and the Philippines have had relations with exchanges since before the colonial era, and that the Philippines is currently a close partner of Japan.

(2) Prime Minister Abe commented that Japan is very focused on the Philippines, that Japan has pushed forward the development of the Philippines for many years up to now through the Japan International Cooperation Agency (JICA) and so on, and that Japan will continue to provide the utmost support regarding matters upon which President Duterte is particularly focused, such as maritime security, measures against terrorism, Mindanao Peace, and nation-building based on long-term development plans.

Prime Minister Abe then stated that in the area of maritime security, he intends to provide strong support for the capacity building of the Philippines, that he welcomes the signing of official documents of exchange related to two large patrol ships, and that he intends to launch maritime security dialogues and discuss specific cooperation measures. In addition, Prime Minister Abe welcomed the signing of an agreement for the transfer of the Maritime Self-Defense Forces (MSDF)'s TC-90 aircraft and commented that he intends to proactively promote security and defense cooperation.

Furthermore, in regard to measures against terrorism, Prime Minister Abe stated that Japan intends to provide high-speed boats and others to the Philippines Coast Guard.

Prime Minister Abe then remarked that with a view toward the establishment of Mindanao Peace, Japan will continue to contribute to the correction of interregional disparities through the development of human resources and so on, that he welcomes the signing of official documents of exchange related to the "Agribusiness Promotion Project," and that he intends to make a decision regarding support in the field of electric power in the Bangsamoro region at an early date.

Prime Minister Abe also commented that he intends to provide cooperation for nation-building based on the long-term development plan, that the formulation of master plans related to electric power, transportation, and so on, not only in the Manila area, but also regional cities such as Davao, and surveys regarding a Manila subway will be completed in September next year, and that he hopes that such initiatives will lead to industrialization. Prime Minister Abe added that he welcomes the issuance of the "Industrial Cooperation Initiative" and the signing of a memorandum of understanding in the area of ICT, and that Japan intends to carry out surveys regarding a railway between Malolos and Clark in order to realize the "Clark Green City Initiative."

President Duterte responded to this by stating that he is sincerely grateful for JICA's support, and that he has served as the mayor of Davao for 22 years and during that time JICA completed various projects such as an airport, and he then expressed his appreciation for Japan's support.

(4) In regard to the issue of North Korea, Prime Minister Abe remarked that the threat of nuclear weapons and missiles by North Korea is at a new stage, that in order to change the behavior of North Korea, a strong message must be issued expressing that no provocative actions will be tolerated, based on measures such as the adoption of new Security Council resolutions and the strict implementation of relevant resolutions, that he is grateful for President Duterte's strong support related to the abduction issue, and that he intends to call upon North Korea to take concrete actions for the early resolution of the abduction issue. Prime Minister Abe added that he is hoping for the understanding and cooperation of the Philippines in this regard.

In response to this, President Duterte stated that he firmly promises to condemn the continuation of nuclear weapon tests by North Korea, and that North Korea must be returned to the Six-Party Talks based on encouragement in solidarity with the international community.

(5) The two leaders then exchanged opinions concerning the situation in the South China Sea. President Duterte commented that since an arbitral award has been issued in regard to the South China Sea issue, there is no choice but to hold discussions based on this, that the Philippines will hold discussions at any time in accordance with the principle of the rule of law, including the United Nations Convention on the Law of the Sea, and that Japan and the Philippines are in similar situations. President Duterte added that since the Philippines is always in the same standpoint as Japan, Japan should feel peace of mind, and that in regard to maritime issues, it is necessary to ensure freedom of navigation.

Prime Minister Abe stated that the South China Sea issue is directly connected to the peace and security of the region and is a matter of interest for the entire international community, and that in regard to the arbitral award, it is important to resolve conflicts at sea in a peaceful manner in accordance with the United Nations Convention on the Law of the Sea and so on, and to refrain from intimidation with force and the use of force. Furthermore, Prime Minister Abe remarked that he welcomes the fact that President Duterte is working hard to improve and develop relations between the Philippines and China and is thus contributing to the peace and security of the region.

In the presence of the two leaders, a signing ([a] through [e]) and exchange (f) took place regarding the relevant documents below. 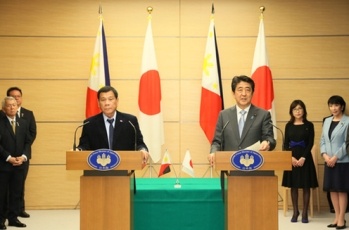 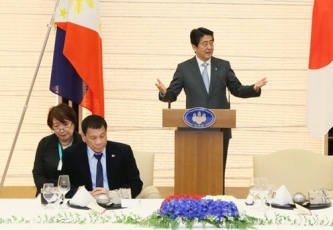 After this, a banquet hosted by Prime Minister Abe was held and approximately 70 relevant persons connected with the Philippines centering on Mindanao were invited. In a very friendly atmosphere, the 60th anniversary of the normalization of diplomatic relations between the two countries was celebrated, and conversations were held on a wide range of topics related to bilateral relations, including cultural and interpersonal exchanges.