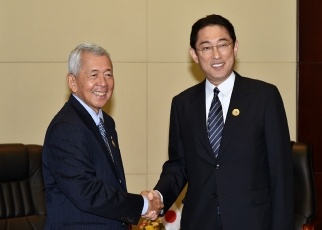 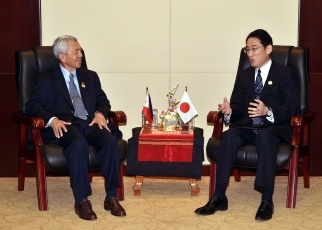 On July 25 at 2:00 p.m. (local time) for approximately 35 minutes, Mr. Fumio Kishida, Minister for Foreign Affairs of Japan, held a Foreign Minister’s Meeting with H. E. Mr. Perfecto R. Yasay, Foreign Affairs Secretary, the Republic of the Philippines, during his visit to Vientiane, Laos, to attend ASEAN-related Foreign Ministers’ Meetings. The overview of the meeting is as follows.

Foreign Minister Kishida congratulated the inauguration of the Duterte administration, and stated that this year marks the 60th anniversary of the normalization of Japan-Philippines relations and expressed his desire to further assertively develop the cooperative relationship between the two countries under the ''strategic partnership.'' The two ministers agreed to cooperate closely toward strengthening the relationship.

Furthermore, Minister Kishida stated that Japan and the Philippines are close partners in a wide range of areas including political affairs, security, economy, and culture. He stated that Japan will steadfastly provide patrol vessels in order to enhance the maritime capacity of the Philippines, and expressed his desire to promote cooperation between the defense authorities including cooperation on defense equipment such as leasing the MSDF's training aircraft TC-90, visits of MSDF vessels to the Philippines, and implementation of joint trainings, his desire to actively proceed with support for priority areas under the Duterte regime including infrastructure development, Mindanao development, and fighting crime and terrorism through the ODA, and his intention to continue to support the Mindanao Peace Process, and expressed his hope for visits to Japan by President Duterte and Foreign Affairs Secretary Yasay.

In response, Secretary Yasay expressed the gratitude of the Philippines for the Japanese support so far and stated that the Japanese support in the infrastructure area in particular has contributed to the Philippines and the life of the people. He also expressed his gratitude with regard to the provision of patrol vessels, stating that they are very important to protecting the territorial waters and territory of the Philippines. Furthermore, he stated that as Japan's support for Mindanao enhances the life of the people in the region, this can be expected to enhance security.

Minister Kishida stated in light of the final ruling in the arbitral proceedings between the Philippines and China the desire for close collaboration between Japan and the Philippines so that the parties comply with the ruling and the dispute be resolved peacefully.

In response, Secretary Yasay stated that the Philippines esteems the inclusion of full respect for legal and diplomatic processes in accordance with the universally recognized principles of the international law including the UN Convention on the Law of the Sea (UNCLOS) in the Joint Communique that was issued at this ASEAN Foreign Ministers' Meeting as a matter that will lead to the resolution of the dispute going forward.

Minister Kishida stated his desire to receive cooperation in resolving issues of concern such as North Korea's nuclear weapons, missiles, and abduction, to which Secretary Yasay responded that he strongly desired to cooperate with Japan.