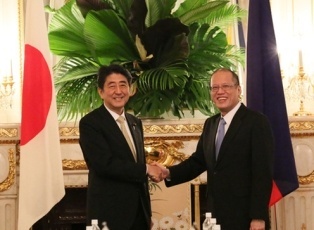 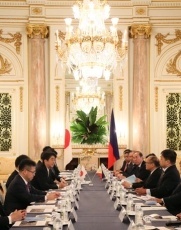 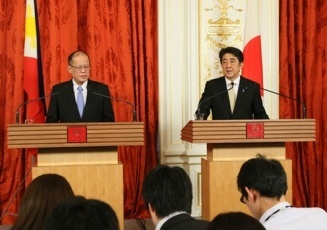 Photo: Cabinet Public Relations Office
On June 4, commencing at 6:00 p.m. for approximately 45 minutes, Mr. Shinzo Abe, Prime Minister of Japan, held a meeting with H.E. Mr. Benigno S. Aquino III, President of the Republic of the Philippines, who was on a visit to Japan as a state guest, at the State Guest House. The outline of the meeting is as follows.
As outcomes of the summit meeting, the following documents were issued: ‘‘Japan-Philippines Joint Declaration: A Strengthened Strategic Partnership for Advancing the Shared Principles and Goals of Peace, Security, and Growth in the Region and Beyond(PDF)

’’, ‘‘Action Plan for Strengthening of the Strategic Partnership(PDF)

Noting that Japan will continue to promote initiatives under ‘‘Proactive Contribution to Peace,’’ Prime Minister Abe explained the significance of Legislation for Peace and Security that was submitted to the Diet and stated that he wants to further strengthen security cooperation with the Philippines against the backdrop of an increasingly severe security environment in Asia. In this regard, both leaders decided to initiate negotiations to conclude an agreement on the transfer of defense equipment and technology in order to promote defense cooperation in the areas of disaster relief and maritime security, With regard to assistance for the Philippine Coast Guard (PCG), Prime Minister Abe welcomed the signing of a contract for the construction and acquisition of patrol vessels (Note) and stated that the Government of Japan wants to strengthen consultations towards the further enhancement of Maritime Domain Awareness (MDA) of the PCG. Both leaders confirmed to continue cooperation in this area.
(Note: The contract was signed on June 4 between the Government of the Philippines and a Japanese company for the construction of 10 patrol vessels to be procured by the PCG. )

Prime Minister Abe expressed his support for efforts by the Government of the Philippines to secure enduring peace in Mindanao, and stated that the Government of Japan will promote the Japan-Bangsamoro Initiatives for Reconstruction and Development (J-BIRD II) (Note), in view of the establishment of a new autonomous political entity. In response, President Aquino expressed his appreciation for Japan’s support in the Mindanao peace process and welcomed the implementation of J-BIRD II as an initiative that is in line with the policies of the Government of the Philippines.
(Note: A new phase of the Japan-Bangsamoro Initiatives for Reconstruction and Development (J-BIRD) that will focus more on ensuring economic autonomy in the Bangsamoro Area.)

(3) Economy, and cultural and people-to-people exchanges

Prime Minister Abe stated that the Government of Japan will steadily implement ‘‘Cooperation Roadmap for Quality Infrastructure Development in the Transport Sector in Metropolitan Manila Area,’’ which was agreed upon this time in order to further promote trade and investment between both countries. Prime Minister Abe also requested  further efforts by the Government of the Philippines to develop business-friendly environment in the Philippines in order to encourage more Japanese companies to advance to the Philippines. In addition, Prime Minister Abe stated that Japan intends to support the North-South Commuter Railway project with total project cost of approximately 300 billion yen as a whole by actively utilizing its finance and technologies. He also stated that Japan decided to provide assistance of 34 billion yen for the Metro Manila Priority Bridges Seismic Improvement Project and the Project for Davao City Bypass Construction. Furthermore, he explained that these initiatives are a part of the ‘‘Partnership for Quality Infrastructure’’ announced recently, and Japan will continuously promote infrastructure investment in Asia under the Partnership.
In response, President Aquino stated that Japan’s assistance with its  sophisticated technologies has been contributing greatly to strengthening the infrastructure of the Philippines, and expressed his gratitude for Japan’s support for each project. Both leaders shared the view that in the run-up to the 60th anniversary of diplomatic relations next year they will further promote exchanges between the two countries, including through tourism, the Japan-East Asia Network of Exchange for Students and Youths (JENESYS) 2015, the WA Project, and the Japan Exchange and Teaching (JET) Programme.

3. Issues in the regional and international community

President Aquino, referring to land reclamation activities in the South China Sea, expressed his gratitude for a statement issued at the G7 Foreign Minister’s meeting, and explained that the Philippines is seeking a peaceful settlement of disputes under the rule of law, and the disputes should be settled through diplomatic efforts also. He also explained that the Philippines is utilizing an arbitration procedure to settle the disputes and is hoping that a code of conduct that is legally binding will be formulated. In response, Prime Minister Abe stated that Japan shares deep concern with the Philippines on unilateral actions to change the status quo, including large-scale land reclamation and the building of outposts in the South China Sea, and that Japan will work together with other countries to achieve the ‘‘rule of law,’’ along with supporting the utilization of the arbitration procedure by the Philippines.

Prime Minister Abe explained that tensions remain high in relation to the nuclear and missile issues of North Korea, and that the abductions issue is also a serious problem, and he expressed his hope to continue to cooperate with the Philippines. In response, President Aquino expressed his support for Japan’s position, and explained the intention to support Japan with regard to the abductions issue.

Prime Minister Abe stated that Japan will fully support the Philippines for the success of the Asia-Pacific Economic Cooperation (APEC) meeting to be held in the Philippines this year. He also expressed his intention to achieve concrete outcomes in the United Nations (UN) Security Council reform this year, the 60th anniversary of the founding of the UN. In response, President Aquino expressed his gratitude for Japan’s cooperation with the APEC meeting, and expressed his support for Japan’s position on the UN Security Council reform.