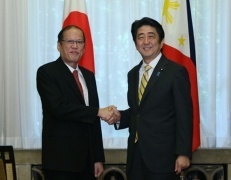 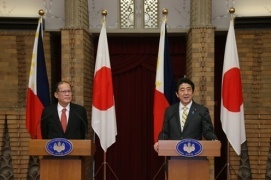 On Tuesday, June 24, Prime Minister Shinzo Abe held a summit meeting with H.E. Mr. Benigno S. Aquino III, President of the Republic of the Philippines, who was on a visit to Japan. The outline of the meeting is as follows. The meeting consisted of a small meeting and a working lunch.

(1) At the beginning, Prime Minister Abe stated that he would like to further strengthen relations with the Philippines as a strategic partner. President Aquino also expressed his intention to strengthen the bilateral relations further, and the two leaders shared the view to strengthen the strategic partnership.
(2) The two leaders exchanged views on regional affairs including the issue of the  South China Sea. President Aquino explained South China Sea situation including the arbitration process instituted by the Philippines as to the dispute with China regarding the South China Sea, and expressed his gratitude for the Government of Japan’s support for the Philippines’ efforts to resolve the problem peacefully through international law. Prime Minister Abe explained the three principles of the rule of law that he discussed in his speech at the recent Shangri-La Dialogue (Note: (i) states shall make and clarify their claims based on international law, (ii) states shall not use force or coercion in trying to drive their claims, and (iii) states shall seek to settle disputes by peaceful means). Following that, the two leaders confirmed the importance of peaceful settlement of disputes and application of rule of law.
(3) The two leaders also exchanged views about the role of the U.S. in the region. Prime Minister Abe welcomed the Enhanced Defense Cooperation Agreement recently signed  between the Philippines and the U.S. to strengthen defense cooperation, saying it will promote the presence of the U.S. in the region, including enhancing the capacity to respond to disasters, and contribute to the peace and stability of the region.

(1) Political and security relations
Prime Minister Abe explained that the government of Japan has formulated “Three Principles on Transfer of Defense Equipment and Technology” clarifying standards for the transfer of defense equipment and technology overseas, and is in the process of deliberating the relationship between the right of collective self-defense and the Constitution as initiatives of the “Proactive Contribution to Peace”. Furthermore, he stated that the foundation of Japan as a peaceful nation remains unchanged, and Japan will undertake careful explanations to the Philippines. President Aquino expressed support for Japan’s current initiatives. Additionally, the two leaders shared the view to continue cooperation in the area of maritime safety, including the provision of patrol vessels.
(2) Economic relations
i) Prime Minister Abe explained Japan’s current economic situation and the revised Growth Strategy, which places an emphasis on utilizing human resources including foreigners: foreign housekeeping support worker will be accepted on a trial basis in National Strategic Special Zones and the Technical Intern Training Program will be revised including the expansion of the job categories with necessary adjustment. Prime Minister Abe also stated that the greatest potential for accelerating growth lies in the further participation of women, and he welcomed the participation of the Philippines, the Asian country where women are said to be the most active, in the World Assembly for Women to be held in Japan in September. Prime Minister Abe also stated he will continue to emphasize the acceptance of nurse and care worker candidates under the Japan-Philippines Economic Partnership Agreement, and would like to cooperate mutually on expanding the acceptance. In response, President Aquino expressed gratitude for the progress of measures to accept more foreign human resources including nurses and careworkers.
ii) Prime Minister Abe stated that he would like to deepen the win-win economic relationship, and that Japan will continue to support the Philippines in fields such as transportation and traffic infrastructure, which form the basis for growth. President Aquino expressed his gratitude for Japan’s support, and the two leaders shared the view to continue cooperation in these fields.
(3) People-to-people exchanges
Prime Minister Abe explained that he recently announced a further easing of visa requirements for nationals of the Philippines under the “Action Program toward the Realization of Japan as a Tourism-Oriented Country 2014.” President Aquino expressed his gratitude for Japan’s measure.
(4) Mindanao peace process
President Aquino explained the current circumstances of the Mindanao peace process, in which a peace agreement was recently reached, and expressed his gratitude for the support of Japan (Note: Since 2006 Japan has implemented over 15 billion JPY in aid). Prime Minister Abe once again offered his congratulations on the peace agreement, and stated Japan will continue to support the establishment of peace and sustainable development in Mindanao with focusing three areas: community development, human resources development and economic development.