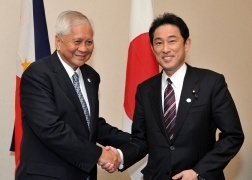 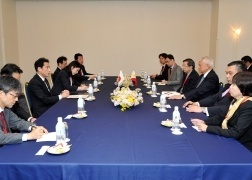 On Friday, April 11, for approximately 30 minutes from around 6:00 pm, Foreign Minister Fumio Kishida held a meeting with H.E. Mr. Albert F. del Rosario, Secretary of Foreign Affairs, Republic of the Philippines, during his visit to Japan to attend the Non-Proliferation and Disarmament Initiative (NPDI) Foreign Ministers’ Meeting in Hiroshima.

(1) Having welcomed Foreign Secretary del Rosario’s visit to Hiroshima, Foreign Minister Kishida expressed that Japan is committed to continuing its assistance in the rehabilitation and reconstruction phase for the damages caused by typhoon Haiyan in November last year, and congratulated on the signing of the “Comprehensive Agreement on the Bangsamoro” last month. Foreign Secretary del Rosario expressed his sincere appreciation by saying that Japan’s assistance to typhoon victims is extremely generous and that peace in Mindanao would had never been accomplished without Japan’s support.
(2) As to the maritime cooperation which is an important pillar of the strategic partnership between the two countries, Foreign Minister Kishida said that Japan continues its cooperation to the capacity-building of the Philippine Coast Guard and strengthens its support for human resource development in addition to the provision of 10 patrol vessels and the enhancement of communication systems. In response to this, Foreign Secretary del Rosario expressed his sincere appreciation to such assistance. Moreover, Foreign Minister Kishida said that Japan wishes to discuss the Philippines more closely on the cooperation in security areas through such occasions as the 7th Politico-Military Consultations which will be held next week. Foreign Secretary del Rosario replied that the Philippines attaches its importance to the strategic partnership with Japan, and the ministers shared the view to further strengthen their strategic partnership.

(1) As to the issue concerning the South China Sea, Foreign Minister Kishida mentioned that Japan issued a press statement expressing Japan’s support from the viewpoint of the “rule of law” to the Philippines’ use of arbitral proceedings under the United Nations Convention on the Law of the Sea aiming for peaceful settlement of disputes on the basis of international law. Foreign Secretary del Rosario explained that the Philippines submitted documents to the Arbitral Tribunal and expressed his appreciation for Japan’s clear support.
(2) The ministers agreed to further enhance their cooperation towards the common target aiming for the nuclear-free world through the NPDI Foreign Ministers’ Meeting in Hiroshima.
(Note) The 7th Politico-Military Consultations will be held on April 16 in Manila and attended by the representatives from the Ministry of Foreign Affairs (Mr. Kenji Kanasugi, Deputy Director-General, Southeast and Southwest Asian Affairs Department) and Ministry of Defense from Japan, and from the Department of Foreign Affairs and Department of National Defense from the Philippines. Security policy, regional affairs, cooperation in security areas, among other, will be discussed during the consultations.