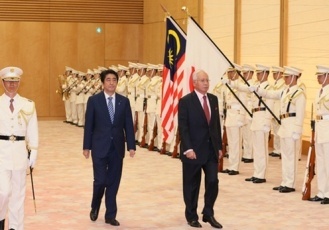 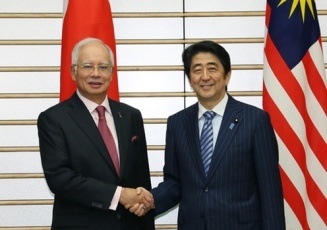 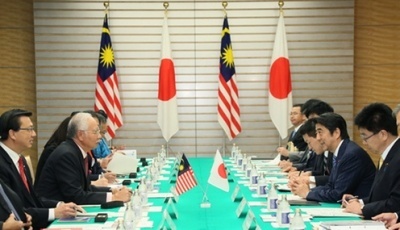 Photo: Cabinet Public Relations Office
On May 25, commencing at around 6:20 p.m. for approximately 50 minutes, Mr. Shinzo Abe, Prime Minister of Japan, held a meeting with the Honourable Dato’ Sri Mohd Najib bin Tun Abdul Razak, Prime Minister of Malaysia, who was on an official working visit to Japan. The overview is as follows.
Following the meeting, both leaders issued the ‘‘Japan-Malaysia Joint Statement on Strategic Partnership’’

(1) Prime Minister Abe expressed his respect for the leadership that Prime Minister Najib is displaying as the Association of Southeast Asian Nations (ASEAN) chair in the milestone year of the establishment of the ASEAN Economic Community (AEC). He also stated that he, through Prime Minister Najib’s visit this time, wishes to further strengthen the relationship between the two countries, which has been deepening in all fields including politics and security, based on the Look East Policy (LEP) and close economic ties, and thereby to jointly contribute to the stability and prosperity of the regional and international community.
(2) Prime Minister Najib expressed his intention to further deepen the solid relationship between the two countries with Prime Minister Abe, and to cooperate closely in order to realize a peaceful, prosperous and dynamic ASEAN.

Both leaders confirmed that the two countries share strategic interests and decided to elevate the bilateral relationship to a ‘‘Strategic Partnership’’ based on the cooperative relationship that has been built thus far, and thereby to further strengthen cooperation on wide-ranging challenges in the region and the international community.

i) Prime Minister Abe explained that Japan has consistently followed the path of a peace-loving nation in the 70 years since the end of World War II and has contributed to the prosperity of Asia and the world, and that the course will never sway in the future. He also stated that the ‘‘Legislation for Peace and Security’’ that was recently decided by the Cabinet and submitted to the Diet is an initiative for contributing further to the peace and stability of the international community, including through peacekeeping operations (PKOs), and it is also an initiative of ‘‘Proactive Contribution to Peace’’ put into practice. In response, Prime Minister Najib welcomed Japan’s contributions under its policy of ‘‘Proactive Contribution to Peace’’.
ii) In addition, both leaders decided to initiate the negotiation on an agreement for the purpose of promoting defense equipment and technology cooperation.

Prime Minister Abe stated that he would like to cooperate with Malaysia in achieving open and stable seas under the rule of law. In this regard, he highly valued the Malaysian Maritime Enforcement Agency (MMEA)’s intention to develop ASEAN member countries’ maritime personnel, and stated that Japan will consider further assistance to the Agency’s Training Center. Prime Minister Najib expressed his gratitude for Japan’s support to maritime capacity building ofMalaysia.

i) Prime Minister Abe once again expressed his appreciation for the contributions of the LEP, which has been the foundation for today’s close economic and personal relationships, along with welcoming that the two countries recently agreed on a guideline document and will move the Second Wave of the Look East Policy (LEP 2.0) toward implementation. Furthermore, as a specific initiative, Prime Minister Abe explained that the ‘‘LEP 2.0 Training Programme’’ will be launched with the aim of accepting 500 trainees over the coming five years.
ii) Prime Minister Abe explained that under the recently announced ‘‘Partnership for Quality Infrastructure,’’ the Government of Japan will coordinate with the Asian Development Bank (ADB) to achieve ample infrastructure investment both in terms of quality and quantity, and will cooperate to the fullest extent on developing Malaysia’s economy higher value-added and helping it achieve developed nation status by 2020 via infrastructure cooperation and the promotion of investment from Japan. As part of that, Prime Minister Abe conveyed strong expectation that the Shinkansen system will be adopted for the Malaysia-Singapore high-speed railway project.
iii) Furthermore, Prime Minister Abe explained that the Government also attaches importance to promoting cultural and people-to-people exchanges via tourism and the Japan-East Asia Network of Exchange for Students and Youths (JENESYS) 2015 youth exchange program, and has decided to expand a Malaysia-Japan International Institute for Technology (MJIIT) scholarship for ASEAN exchange students. (Note: The Japan-ASEAN Integration Fund (JAIF) will be utilized to establish a new scholarship for doctoral courses).
iv) Prime Minister Najib expressed he highly appreciates the ‘‘Partnership for Quality Infrastructure,’’ and he also expressed high expectations over the promotion of exchanges through LEP 2.0, the MJIIT and other channels. Additionally, Prime Minister Najib explained that an international tender will be held for the high-speed railway project, and he believes Japan will be a highly competitive bidder in that tender.

3. Challenges in the regional and international community

i) Prime Minister Abe explained that he places importance on deepening regional frameworks that have ASEAN at the core, and conveyed his intention to provide total support for Malaysia’s efforts as the ASEAN chair country, through a variety of initiatives. Furthermore, Prime Minister Abe explained reinforcing the EAS is also important, and he will continue to support Malaysia’s efforts so that concrete outcomes, such as a reinforcement plan, can be produced in this milestone year, the 10th anniversary of the EAS. Prime Minister Najib expressed his gratitude for Japan’s support for Malaysia’s efforts as the chair country.
ii) Both leaders shared the view that they will continue to cooperate on concluding the Trans-Pacific Partnership (TPP) promptly and advancing the Regional Comprehensive Economic Partnership (RCEP) negotiations.

i) With regard to the issue of the South China Sea, Prime Minister Abe expressed serious concern on the recent development including large-scale land reclamation, along with stating that it is important to respond based on the rule of law, and Japan supports ASEAN’s response in a coordinated manner and will cooperate with Malaysia, the ASEAN Chair this year. In response, Prime Minister Najib explained that a Chairman’s Statement was issued following discussions by the countries concerned at the ASEAN Summit in April.
ii) Both leaders also exchanged views on the Rohingya boat people issue, and also shared the view that measures to counter extremism and terrorism are important. Additionally, with regard to the United Nations Security Council reform, Prime Minister Najib expressed his support for Japan having a permanent seat on the Security Council, and both leaders shared the view that bringing about reform promptly is important and they will cooperate on achieving that.