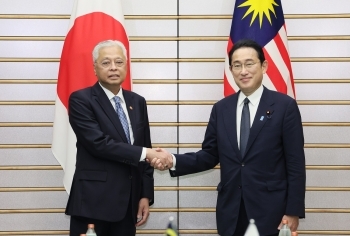 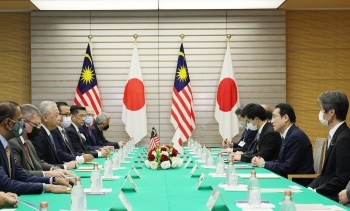 Prime Minister Kishida stated that this year marks the 65th anniversary of the establishment of the diplomatic relations and the 40th anniversary of the Look East Policy, and welcomed the signing of the Memoranda of Cooperation regarding specified skilled worker, youth and sports exchange, and aircraft industry as well as concurred to start discussion on establishing industrial policy dialogue between the two countries. Prime Minister Kishida also expressed his intention to enhance cooperation with Malaysia including the priority areas of the ASEAN Outlook on the Indo-Pacific (AOIP) toward realizing a Free and Open Indo-Pacific (FOIP). In response, Prime Minister Ismail Sabri expressed appreciation for the support extended by Japan which greatly contributed to the development of Malaysia, stating that he was delighted to visit Japan in this anniversary year. Prime Minister Ismail Sabri also expressed his desire to further strengthen the Strategic Partnership between the two countries.

Prime Minister Kishida stated that the Look East Policy is the cornerstone of the development of Malaysia and the cordial relations between the two countries. The two leaders concurred to work together towards the further development of the Policy, taking into consideration the demands of the times. Prime Minister Kishida also stated that he hoped an early opening of a branch campus of the University of Tsukuba. In response, Prime Minister Ismail Sabri emphasized the importance of the opening of the branch campus and explained that he had given an instruction to realize it.

(3) Regional Affairs and cooperation in the international arena

Prime Minister Kishida stated that Russia's aggression against Ukraine violates respect for sovereignty and territorial integrity, which is stipulated in the UN Charter and the ASEAN Charter, and shakes the very foundations of the international order, including Asia. The two leaders confirmed that aggression against any country is unacceptable, and concurred to work together to deal with the impact on the global economy and to improve the humanitarian situation.

Prime Minister Kishida expressed his strong opposition to unilateral attempt to change the status quo by force in the East and South China Seas. The two leaders confirmed the importance of maintaining and strengthening the free and open international order based on the rule of law.

The two leaders confirmed that they would continue to coordinate in response to North Korea including nuclear and missile issues and the abductions issue.

The two leaders confirmed their coordination regarding regional and international issues such as UN reform and the situation in Myanmar. They also exchanged views on free trade while welcoming the launch of the Indo-Pacific Economic Framework (IPEF) by the United States.

The two leaders confirmed that they would strengthen cooperation toward the 50th Year of ASEAN-Japan Friendship and Cooperation next year.

An Exchange of Notes Ceremony was held for three Memoranda of Cooperation between Ministers as below: 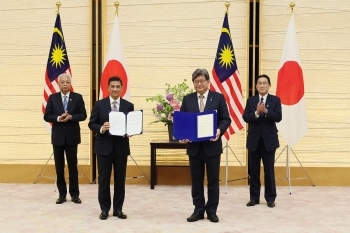 (2) Memorandum of Cooperation on Basic Framework for Information 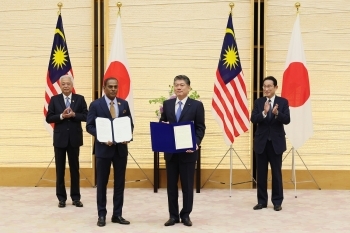 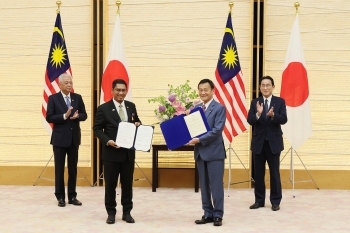