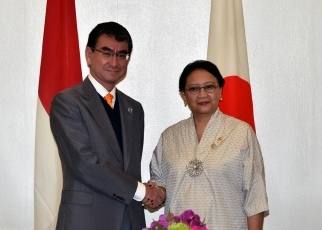 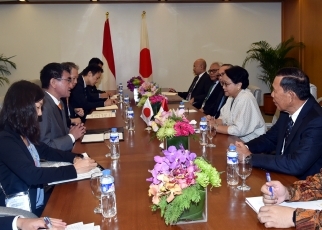 On August 8, commencing at 9:50 a.m. (local time) for approximately 30 minutes, Mr. Taro Kono, Minister for Foreign Affairs held a meeting with H.E. Ms. Retno L.P. Marsudi, Minister for Foreign Affairs of the Republic of Indonesia, in Manila, the Philippines, during his visit to attend ASEAN Foreign Ministers’ Meeting (AMM) and Related Meetings. The overview of the meeting is as follows.

Minister Kono expressed his intention to work together with Minister Retno to further strengthen the strategic partnership between Japan and Indonesia, to accelerate consultations to conclude an agreement on the transfer of defense equipment and technology, and to work together closely towards implementing the second Japan-Indonesia Foreign and Defense Ministerial Meeting (2 + 2) within the year. Furthermore, Minister Kono stated that Japan has decided to provide grant aid to Indonesia for the establishment of a disaster risk reduction data system and expressed his hope that this will contribute to improving the disaster risk reduction capabilities of Indonesia.

In response, Minister Retno extended her congratulations to Minister Kono on his appointment as Foreign Minister, and expressed her intention to work together with Minister Kono to further develop bilateral relations and address regional and global issues.

In addition, the two ministers confirmed that they will advance the cooperative projects approved by leaders of Japan and Indonesia relating to Patimban Port, the North-South Line and East-West Line of the Jakarta Mass Rapid Transit, and accelerating the operating speed of the northern Java railway.

The two ministers exchanged views on regional affairs, including the issues of the South China Sea and North Korea, and shared the view to continue to work closely together. In particular, with regard to the issue of North Korea, the two ministers agreed that it is necessary to strengthen effective pressure on North Korea to urge it to take concrete actions towards denuclearization. Furthermore, Minister Kono sought understanding and cooperation regarding the abductions issue.