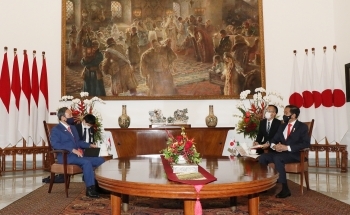 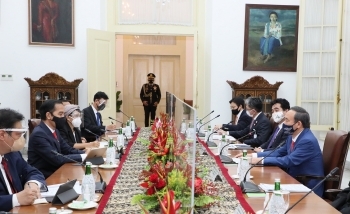 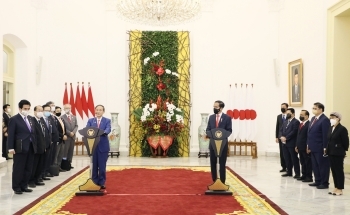 Joint Press Occasion Photo: Cabinet Public Relations Office
On October 20, commencing at 4:15 p.m. local time (6:25 p.m. Japan time) for approximately 80 minutes, Mr. SUGA Yoshihide, Prime Minister of Japan, who is currently visiting Indonesia, held a Japan-Indonesia Summit Meeting with H.E. Mr. Joko Widodo, President of the Republic of Indonesia, at the presidential palace. The overview of the talk is as follows. The meeting was attended on the Japanese side by officials including Deputy Chief Cabinet Secretary SAKAI Manabu and Special Advisor to the Prime Minister IZUMI Hiroto, and on the Indonesian side by officials including State Secretariat Pratikno, Coordinating Minister for Economic Affairs Airlangga Hartarto, Minister for Foreign Affairs Retno Marsudi, and Minister of State Owned Enterprises Eric Thohir. A one-on-one meeting was held for the first 20 minutes of the summit.

At outset, President Joko welcomed Prime Minister Sugas’s visit and expressed his intention to further develop the relationship between the two countries as strategic partners. In response, Prime Minister Suga extended his congratulations on the first anniversary of the inauguration of the second Joko administration and stated he hoped to work together to further strengthen the traditional cordial relations between the two maritime nations in the Indo-Pacific region, including in the areas of infrastructure and human resource development.